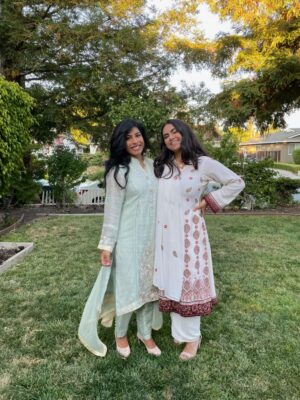 Photo by Noor Khan
Noor and her friend model traditional Pakistani dresses before attending a wedding.

When junior Noor Khan walks around campus, she sees dozens of Vietnamese, Chinese, Caucasian and Indian students. However, she can count on her fingers the number of students who share her Pakistani ethnicity — about four or five students, Khan thinks.

Nevertheless, the culture and religion plays a large part in the lives of Pakistani families at the school, even if it’s hard for them to find and connect with students of their same ethnicity.

An important holiday celebrated by Pakistani Muslims is Ramadan, which will begin on April 2 and on end May 1 this year. The month consists of fasting during daytime hours, prayer and community; Muslims usually fast for around 17 hours a day during Ramadan.

Students who celebrate Ramamdan abstain from eating during lunchtime, which Wasil said often leads to a lot of confusion among his peers.

“All my friends always ask me how long I have to fast, and when I say for a month, they assume I have to fast constantly the whole month, which is the funniest part,” Wasil said.

Following Ramadan is Eid, which marks the end of fasting from dawn to sunset. During the three day period of Eid, Wasil said families gather with friends and relatives to eat special meals, give gifts and play games. Popular dishes eaten during this celebration include baklava, kebabs and biryani.

Pakistan’s Independence Day, Aug. 14, is another major holiday in which people celebrate Pakistan’s freedom and liberation from British rule by lighting fireworks and displaying the Pakistan flag.

“It’s unfortunate that people don’t recognize that they are two separate countries, but it’s common,” she said. “It’s not really offensive, it’s just something that you have to remind them of.”

Despite some similarities between Pakistani and Indian cultures, differences are significant and sometimes bitter. One prime contrast is that the dominant religion in India is Hinduism.

In addition to these ideological differences rooted in religion, the two countries have a history of intense conflict over the disputed area of Kashmir, Noor said.

“Someone could be talking about Kashmir with someone who is Indian and, while that’s not necessarily feeling left out, there could be a difference of thought process,” Noor said.

When it comes to the older generation of Indian and Pakistani people, many have strong opinions that can be harmful and confusing to younger generations.

Noor has many experiences where she’s heard many passive aggressive comments about the divide between India and Pakistan.

“People might have something to say about Pakistan or the Partition [of India], or just passive aggressive comments about it,” Khan said.

Though Noor tries her best to brush off the comments, she still feels that the snide mentions of Kashmir and the Partition of India are hurtful.

Following the attacks on Sept. 11, 2001, many Pakistani people said they faced acts of racism due to their appearance and Pakistan’s connection to Osama bin Laden.

Sophomore Zineerah Ahmed said this led to her being discriminated against in fourth grade.

”Some kids next to me saw me and laughed and asked, ‘Aren’t all Pakistanis terrorists?’” Ahmed said. “I was confused since I’ve never experienced someone saying that, so I stayed silent pretending not to hear anything.”

Ahmed said Pakistani Americans are often discriminated against, and they are subjected to many terrorist stereotypes. She has faced the occasional bomb and terrorist jokes, but she chooses to ignore them and let them pass, but “sometimes it does get frustrating.”

Ahmed loves finding similar students on campus and how she can open up to other students about these situations and they’ll understand.

“Finding someone who is Pakistani at Saratoga High feels so nice because you can connect with them and relate about your shared experiences,” Ahmed said.