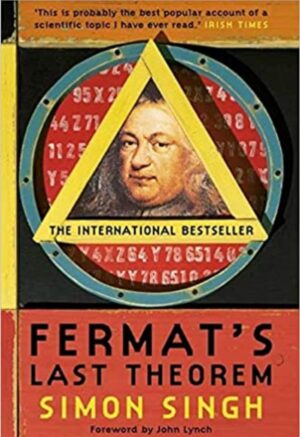 In the popular math book “Fermat’s Last Theorem,” Singh masterfully weaves a tale of persistence, intelligence and desperation in the search of a final answer.

Four centuries ago, brilliant judge and mathematician Pierre de Fermat posed a mathematical riddle that would puzzle and stump the greatest mathematicians of the past centuries. Called Fermat’s Last Theorem, the infamous question was only put to rest recently, in 1993 by the British mathematician Andrew Wiles.

I found the book to be a fascinating dive into what real mathematics research looks like and the recent 20th century advances in modern number theory. Simon Singh masterfully simplifies the material and makes it accessible to non-experts.

This is Simon Singh’s second book that I have read, the first being The Code Book. Singh, first and foremost, can be viewed as a historian. His books are based on the theme that scientific advances, whether it be the proof of an unsolved problem or quantum cryptography, can be traced back many centuries to a wide plethora of people.

Each of these people has their own unique story, along with their contributions to the field. Galois was killed at the age of 20 in a duel, despite inventing nearly all of modern abstract algebra. Archimedes was killed in Rome after being so involved in a geometry problem that he didn’t realize a soldier was telling him to leave.

These anecdotes, while not directly related to the content covered, provide depth to the story that mathematics alone cannot do. I learned many new facts about the mathematicians whose works I admired, and it made me appreciate the advances of mathematics from a more wholesome perspective.

They demonstrate the way the minds of mathematicians work. To the enormous world outside of mathematics, this is a tremendously useful thing and is done in a neat, positive manner.

Simon Singh structures this book in chronological order, starting from the first advances in ancient Greece, and ending with the most recent breakthroughs in 20th century number theory. I particularly like this style of writing because it takes the reader along the same journey that mathematics itself underwent.

The book does have its share of flaws, however. The 302-page book reads like a string of mathematical tidbits. These range from anecdotes, proofs, and descriptions of mathematics concepts. But despite the chronological order, I feel that the book lacks structure in some places.

In particular, Singh goes on lengthy tangents often that can last for as long as 30 pages. For example, when talking about Pythagoras, Singh embarks on a discussion about how the vibrations of a string affect the harmony of the sound. This detracts from the primary focus of proving Fermat’s last theorem in favor of ad-hoc mathematical exposition.

This makes the book seem to try to unsuccessfully cover all of 20th century mathematics from a birds-eye view and with little rigor, which is impossible to do in only 300 pages.

While this may be enticing for some, more experienced readers may be disappointed at the repeated superficial treatments present. It was a bit of a slog at times for me when I had to read about rudimentary concepts such as the Pythagorean theorem and greatest common divisor, which are described in large, paragraph form.

One part of this exposition that I appreciated however, was the simplicity with which he introduced Fermat’s little theorem. Many readers, including myself, were familiar with the notion of the Pythagorean theorem, and Singh extends this notion smoothly to explain Fermat’s Last Theorem, the focus of the book, in a cohesive manner.

Additionally, while Wiles, the mathematician who solved the problem, is a well-known name in the mathematics community, Singh additionally details a lot of behind-the-curtain scenes that I was not aware of previously. For example, he details Wiles’s private reaction to finally settling the proof after coming back from a walk one afternoon. I already knew a lot about Fermat’s famous theorem before reading the book, but his additional details made me appreciate the hardships Wiles had to deal with while solving the problem.

Seven years after starting to solve it, Wiles laid the problem to rest and presented the famous proof to an audience. At the end of the proof, Wiles said the famous words, “I think I’ll stop here.” And thus ended the enigma of a problem that evaded the best minds of the world for three centuries.