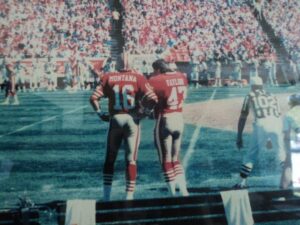 What does it mean to play football all the way to the pro level?

“I have had seven knee surgeries, a shoulder surgery, degeneration and stenosis in my neck, two lower fractures in the lower spine, and have broken both hands several times in addition to fingers. I’ve had my front teeth busted out and received 12 stitches in my left arm from a large gash. Besides that, I feel good.”

These are the words of John Faylor, currently in his seventh year as the school’s varsity defense coach. Faylor played backup defensive back for the San Francisco 49ers from 1986-1987, a dream of his since he was a child. His three sons, SHS alumnus Mitchell, senior Grant, and sophomore Vinny Faylor have all played the sport.

The oldest Faylor, who started playing in Pop Warner tackle football, a youth football league, in 1970, went to Mitty High School and then at Santa Clara University. Faylor said his inspiration to play football came from his own dad, who played football at the University of Detroit and was drafted by the Houston Oilers. Faylor recalls that his older brother, who “pounded” him constantly, helped toughen him up so he was ready when he put his uniform on.

“I enjoyed every minute of [professional football],” Faylor said. “The pressure was not much for me, I just went out and had fun like I always did, played for the love of the game, not the money.”

After playing for Santa Clara, Faylor signed as a free agent for the 49ers, rejecting two other offers to play with the Atlanta Falcons and Oakland Raiders.

Unfortunately, after just a year playing professionally, Faylor was forced to stop playing football due to a neck injury.

“[I] still suffer every day with a bad neck in addition to many other ailments due to my football career, but I would do it all over again,” Faylor said.

Although the glamour of being a famous athlete can often be considered the highlight of one’s career, Faylor said that the best part of playing was the friendships he built with teammates, and the “comradery of the locker room.”

Furthermore, Faylor has been an inspiration for each of his sons, as they all play football. Vincent said having his dad as a coach helps him improve his game, on and off the field.

“It’s awesome because I get a lot more support since he’s on the field,” Vincent said. “[He] inspired me to play football.”

Next year, he will be a cornerback and receiver for the school’s varsity team.

Mitchell, like his father, had to stop playing due to an injury, a broken leg during football season his senior year of high school.

Grant received a football scholarship to play next year at Menlo College as a receiver and will also play in the all-star game this summer at Charlie Wedemeyer high school, where a football game for some of the best players in the area play, the same game that Mitchell played in 2012 and that John played in 1981.

“Hopefully Vincent will play in the game in 2016 to complete the family,” Faylor said. “He has a chance to play college as well.”

Vincent hopes to go to a Division 1 school for football.

“All my siblings have played, so it’s up to me to be the last one to complete the tradition,” Vincent said. “I’d say I have a pretty good chance.”