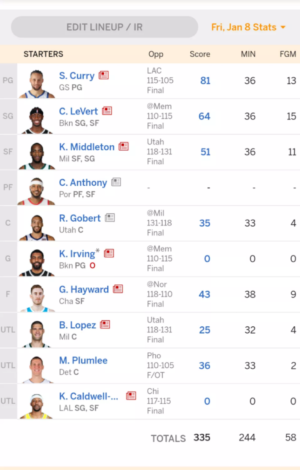 Fantasy basketball is a popular online game in which players draft a team of their favorite NBA stars and earn points based on their performances. But sadly, it doesn’t compare to its more popular counterpart, fantasy football.

Each of the 30 NBA teams also plays 82 games in a normal NBA season, meaning that multiple games are played nearly every day. On the other hand, football games are normally only played on Sundays, Mondays, Thursdays and the rare Saturday. Due to this, checking fantasy football while watching games feels like more of an event and a fun Sunday tradition, as opposed to the daily grind of checking fantasy basketball.

To combat these negatives, the creators of fantasy basketball apps should adopt new formats to make the experience more enjoyable. Sleeper, an up-and-coming app, has implemented a system in which the player only chooses one game each week per player to count points from. This is less time consuming and allows the player to spend less time setting lineups and more time watching games.

These formats, however, have not seen widespread adoption. Newer apps such as Sleeper are still less popular than the tried-and-tested ESPN and Yahoo Fantasy apps.

Fantasy basketball is growing along with the overall popularity of basketball, which has become the national sport of many nations, but these important changes need to be made to the game in order for it to measure up to its football counterpart.