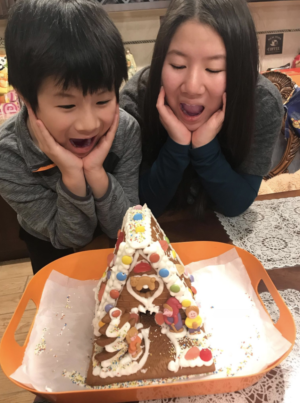 As shelter-in-place continues, parents work to mitigate the lack of socialization and increasing screen time impacting their children.

The smell of the freshly baked Basque pastry escaped the oven and filled the kitchen with ineffable sweetness. Junior Bella Lin proudly looked at her 8-year-old brother Evan, who is becoming a master baker after a summer of practice in quarantine. Together, they placed the pastry in the middle of their dining table, waiting for their Wednesday lunch to begin.

Behind this picture of happiness from staying at home with loving siblings are frustrating long-term uncertainties of children’s physical and mental health development, which many children like Evan are too young to realize themselves. Some have even speculated that ‘20-’21 will be a wasted year in children’s education and development; however, with strong family support, the effects of quarantine and remote learning seem more likely to be minimized for children.

Fear of the ongoing COVID-19 pandemic has affected the lives of households across the community. As the number of infected COVID-19 patients increases by the hundreds in Santa Clara County, schools and community social hubs have remained closed.

The lack of socialization, outdoor exercise and time away from screens are inevitable challenges for children during quarantine. Studies have found that these factors can harm children’s mental and physical development.

According to a paper published by researchers at University College London, socially isolated children from ages 7-11 tend to have lower academic retention and are more likely to be psychologically distressed in adulthood. Moreover, the feeling of loneliness appears to correlate with high levels of stress, which can exacerbate the likelihood of experiencing serious mental health issues like anxiety and depression, as well as cardiovascular diseases like high blood pressure, stroke and heart attack in adulthood.

On top of the impacts from the lack of socialization, the increasing screen time and blue light emission can lead to an even greater chance of developing anxiety, depression, sleep issues and other mental illnesses as well as obesity and memory loss. Children are the most vulnerable when facing these health threats as their brain and eyes are still underdeveloped.

The Lin family became aware of the potential negative and long-term impacts from quarantine on their children and are actively finding ways to mitigate them: Baking is just one of their strategies.

Evan, a student of Foothill Elementary School, spends around five hours on screen every day attending Zoom classes, which is three hours more than the suggested screen time for children, according to a study from Common Sense Media. Many of the online activities like group readings and scavenger hunts depend heavily on looking at a screen.

Even though the intense increase in screen time was initially overwhelming, Evan has been able to finish 90 percent of school work during class time, which leaves him with plenty of free time in the afternoon. To maximize the benefits of his free time, Bella and her parents encourage Evan to ride his bike in their front and back yard every day and jump on the trampoline as a way to stay active and rest his eyes.

Evan listens to his family’s suggestions and is now enjoying his online school days more than in-person learning as he thinks that his current lifestyle is much more “comfortable and manageable.”

Andy, a student at Argonaut Elementary School, has had more trouble adapting to this new learning environment without the help from his parents than his siblings.

Since she knows Andy feels isolated from his elementary school friends, Sun encourages him to communicate with her more frequently. She also taught him how to play badminton over the summer. During the morning break between online classes, the two play in their living room for 20 minutes.

“I learned that if I don’t play with Andy, he will just go straight inside of his bedroom and start watching YouTube,” Sun said. “It is really frustrating because I can’t keep an eye on him the whole day, but I don’t want him to stare at his screen.”

Andy, unlike his siblings, hasn’t learned to manage his time well and doesn’t yet have a strong academic interest, so his social life is “a lot more dependent” on Sun, she said.

Sun said she is in full support of sending Andy back to elementary school when the district allows schools to reopen — regardless of whether a vaccine exists. While she believes that family’s guidance is crucial in the growth of children, she sometimes doubts that her own guidance is not enough to prepare Andy for his future.

She worries that Andy may fall behind on developing social skills, which will disadvantage him when he goes to high school and beyond. Sun added that she believes that these social skills are especially crucial because they cannot be taught by reading, Zoom lessons or purely communicating with parents. However, as of now, Sun observes that Andy is much more adapted to quarantine with her support.

“I sometimes want to play with my friends, but they are all so busy with their online classes,” Ellen said. “So I started to spend a little bit of time every day watching TV and playing games.”

In reality, according to Joshua, his sister spends around five hours watching TV every day.

To combat this issue, their parents have purchased blue light filtering glasses for her to wear and have started to integrate card games into her daily schedule.

Every day after dinner, Joshua’s mom will pull out a stack of cards and organize the family to play a traditional Chinese game called Dou Di Zhu. Even though Joshua thinks it is amusing that his sister has started to play cards because of quarantine, research has indicated that card games have a direct link to memory improvements. Card games prove to be an effective method to make stay-at-home life more interesting for Joshua’s family. It serves as a bonding time for the family and naturally gives them a break from their screens, Joshua said.

The guidance from parents and siblings is more significant than ever to children in quarantine, given the many uncertainties ahead.

“Exploring is what children should do right now. It is their door to the outside world,” Sun said. “It’s really a shame that the door is closed. I hope we can help them to fulfill the excitement of being children so that they don’t completely miss out.”