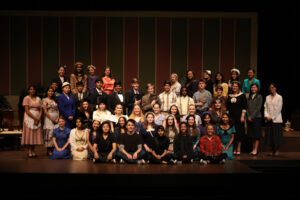 The one-cast production of “You Can’t Take It with You” will premiere on Nov. 11, the first out of its four shows in the McAfee Center. Main characters Alice Sycamore and Tony Kirby will be played by senior Katie Sabel and junior Mateo Morganstern.

“It’s a really simple story of two young people trying to get married, their families going to meet each other, and by the end of act two, everyone goes to jail,” said drama teacher Sarah Thermond, who directs the play.

The students are closing in on their official “off-book” day, when they are able to run through the show without a script, even before the production’s move into the McAfee Center.

“Things are moving quickly,” Sabel said. “Because it’s a one-room play, a lot of the content is just people talking to each other, especially the Sycamore family members since they’re onstage all the time.”

The cast’s rapid progress partially relates to the important aspects of the genre of the play, romantic comedy.

“A lot of key moments are families interacting, which usually means eye contact and being present in the moment,” Sabel said. “Which is hard to do when you’re reading along in the script waiting for your line to come up.”

This year’s production has the record for the largest fall play cast. Re-enactments of radio commercials from 1937 have been added as unofficial parts of the script in order to incorporate more characters and the students playing them.

The radio commercials also play a role in bringing up significant themes for the audience, such as “consumerism and capitalism, how instead we should be focusing on what makes us happy,” Thermond said.

There is a big focus on ensuring that the set designs and costumes more realistically represent the ‘30s and ‘40s, the era in which the story takes place.

During rehearsals that take place from anywhere between 11 to 20 hours per week for lead roles, Thermond stresses the importance of retaining the unique style of American theater and film at the time of the original production.

“There’s a very high energy and quick refined speech to it,” Thermond said. “So even though the play is meant to feel like a real family’s home, there is sort of a style to it that keeps it moving, keeps it energetic, and keeps it understandable for the audience.”

The play, filled with witty and sophisticated humor, lets audience members recognize and relate to just how ridiculous life can be, Thermond said.

In mid-October, cast members and sets were moved to the McAfee Center for stage rehearsals a month before the play’s opening.

“I’m really excited for people to come in and see not only all of the funny timing and all the really strong performances by the students and the school, but also the fact that all of that entertainment and fun can add up to something, and that is a really memorable message,” Thermond said.