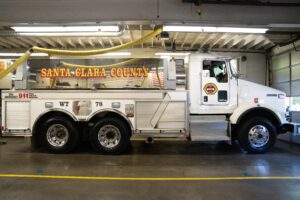 While teaching one of her remote learning classes in August 2020, English teacher Amy Keys learned that she needed to evacuate her home in UC Santa Cruz (UCSC) faculty housing within 12 hours due to the CZU Lightning Complex fire. After finishing her 7th period class, she began packing photographs, important documents, her adult children’s long-ago artwork, writings and keepsake items from her travels.

Keys stayed with her sister-in-law in Berkeley for a week until she was notified it was OK to return home. She recalled ashes falling from the red, gray sky and news reports showing the landscape up in flames. The fire ultimately reached within a mile of the UCSC campus.

Reflecting on her experience with the fire season last year, Keys said she’s nervous about this fire season and others to come.

“I feel really grateful and lucky so far [to not be experiencing that this year],” Keys said. ”I really feel for the people who are experiencing the fires and suffering right now.”

One worrisome fire this year that could be a precursor of others is the Dixie Fire in the northern part of the state. The fire, which has been active since mid-July, is 94 percent contained as of Oct. 5 but burned over 960,000 acres through gusty winds and rugged terrain, causing extensive damage to residences and infrastructure. It is the second-largest wildfire in California history.

Such statistics aren’t surprising. California’s history of megafires dates back to 1932. Yet according to a 2021 New York Times article, the 10 largest fires since then have occurred since 2010, with the 2020 August Complex Fire burning over a million acres and the 2018 Mendocino Complex burning over 450,000 acres.

So how does California plan to solve this problem? Ironically, through more prescribed fires — low-intensity ground fires that whittle down the fuel load necessary for large fires to burn — a solution that’s proving to be the “most promising [method of fire] prevention,” according to a National Geographic article. One hundred years of misguided forest management aimed at suppressing fires has “allowed two to four times the normal amount of woody fuel to accumulate even as the biggest, healthiest, most fire-resistant trees were being logged out.”

Despite strong support from the scientific community, such preventative measures have a long way to go before their implementation starts taking effect. In February 2020, a Nature Sustainability study reported that California would need to burn 20 million acres to restabilize in terms of fire.

Even so, the California Department of Forestry and Fire Protection (CALFIRE) has already started to take action. Starting in 2019, CALFIRE planned to spend a billion dollars over the next five years from the state’s cap-and-trade climate fund for restoration, fuel reduction and prescribed fire and new research, among other purposes.

In response to the Dixie Fire, Santa Clara County has updated its wildfire protocols, a set of procedures that come into effect when the state declares the beginning of wildland fire season, which began on May 10 this year. Wildland fire season usually lasts for four months, spanning from June through September. In recent years, the window has expanded both earlier and later, with many of the most devastating fires such as the October 2017 Tubbs Fire that tore through Santa Rosa and surrounding areas and destroyed almost 6,000 structures and the November 2018 Camp Fire that destroyed the whole town of Paradise and resulted in 85 deaths.

The protocols for handling these fires are always evolving. Captain Justin Stockman from SCCFD said that the 10 fire departments of the Santa Clara County Fire Department (SCCFD) reassess their response each time new ideas, hazards, technologies and capabilities emerge. Recently, they deployed the routine use of tactical water tenders, which quickly transport additional water where fire hydrants aren’t available.

“SCCFD firmly believes that the best way to fight a fire is by keeping it from starting in the first place,” Stockman said in an interview with The Falcon.

When a fire starts, the department tries to dispatch a large force to overwhelm it before it has an opportunity to become too large and difficult to control.

This approach is an effort to prevent large fires such as the two most severe fires in Northern California last year: the SCU Lightning Complex fire, which burned in eastern Santa Clara County and was the fourth largest fire in recorded California history, and the CZU Lightning Complex, which burned in San Mateo and Santa Cruz County and threatened western Santa Clara County and parts of Santa Cruz County, including near the UCSC campus where Keys and her husband live. According to Stockman, these fires strained resources statewide and caused unhealthy air quality across the region.

Since May 10, there have been 76 vegetation fires in SCCFD’s jurisdiction. However, Stockman said this data is “imperfect because it only reflects the communities where SCCFD provides emergency response, and in many cases it is difficult to determine whether a fire impacted or threatened vegetation.” Additionally, this number only accounts for a small proportion of the total number of incidents: the 1,430 emergencies in Aug. 2021 categorized as Emergency Medical Service, service, fire Alarm, hazardous conditions and other types, fire and rescue make up less than 2 percent of the total.

“While these big fires are a stark reminder of the wildfire risk that exists throughout Santa Clara County and the Bay Area as a whole, they only tell part of the story,” Stockman said. “There are hundreds of other fires sparked in Santa Clara County each summer that never grow large enough to make the news or enter into our common memory.”

According to Stockman, SCCFD has held all vegetation fires this season to less than 1 acre, the result of effective pre-fire planning, resource deployment and early detection and dispatch.

The education, prevention and fuel mitigation efforts as well as the work of community members who maintain defensible space on their property also contribute to the suppression of wildfires, Stockman said.

“I would be remiss not to mention the huge contribution of every single Santa Clara County community member in helping us with this mission,” Stockman said. “Every action taken by our community to prevent wildfire makes a difference and we are endlessly thankful for their continued and consistent efforts.”

SCCFD recommends its residents to follow the Ready, Set, Go program and access timely and verified information through systems like AlertSCC. The Ready is where residents fire-proof their homes. With the Set component, community members should establish a plan for their family and pets through a wildfire checklist and emergency supply kit. The Go is the action part of the program, where community members prepare primary and backup evacuation routes.

As a part of their countywide fire service review, the Santa Clara County Local Agency Formation Commission (LAFCO) held a community meeting on Aug. 25. During the open session, county residents provided input on the community’s fire and emergency medical service, with many upholding the sentiment to prioritize fire prevention.

Junior Kaelli Trateng, who lives in the mountains up Oak Street past Madronia Cemetery, recalled that from her room window, she could see the flames of one of last September’s fires. However, her house was separated from the fire by a valley. She felt that it “wasn’t an immediate threat.”

Still, Trateng’s family was constantly checking the fire zone map, which indicated who would have to evacuate, and her home got near the edge of the evacuation zone multiple times. While they had planned an evacuation route along with a place to stay, they ultimately didn’t need to leave their home.

She said her family was mostly impacted by the poor air quality caused by the fires.

“We had to stay indoors and buy 10 air filters. We also shared them with our neighbors because it was really bad out there,” Trateng said. “And we closed all the windows and couldn’t have air conditioning since we didn’t want the bad air coming in. It’s just like you’re stuck in your home.”

In preparation for this year’s wildland fire season, Trateng said her dad cut down the brush surrounding their house a couple times a month so that if something catches on fire, it wouldn’t be near their home.

She advises that others ensure they have an escape route in mind, a place to stay, maintain defensible space around their property and have essentials ready to go in the case of being evacuated.

Beyond the Saratoga community, however, farming communities that have been heavily impacted by wildfires in recent years are more vulnerable to suffering. To combat this, Green Team president Cici Xu, the lead of the Saratoga/Los Gatos City Action team of Silicon Valley Youth Climate Action (SVYCA) and co-lead of its State Advocacy team, advocated for state-level welfare bills concerning wildfire relief with state legislators over the summer.

Xu urged students to be more attentive to wildfires in the news and join youth coalitions in the Bay Area, as she believes students can empower and represent struggling communities through these organizations.

“Youth voices are very powerful,” she said. “After all my two years of advocacy work, I’ve realized that you should definitely believe in yourself.”

Xu, who was born in China and came here to live only a few years ago, recalled when school days there shut down because AQI levels soared above 300. The kids there could do nothing about it. In contrast, Xu said that in the U.S. there are enough resources to “even start your own initiative if you’re really passionate about the environment.”

Despite common misbeliefs that wildfires are far-away issues, Xu stressed that they are localized because all communities are interconnected. She encourages the Saratoga community to donate N-95 masks for people continually exposed to air pollution.

As the leader of the Saratoga/Los Gatos branch of SVYCA, a coalition that created a mandatory high school curriculum about climate change for the Fremont Union High School District, Xu hopes SHS can integrate the topic more into their science curriculum.

“There are a lot of ways for students to get connected with wildfires in welfare,” she said, noting the Green Team at school and the Youth Climate Action Coalition. “I feel like we can really challenge ourselves to be on the same page as the environmental awareness communities in other schools. We need to keep our connection with nature alive.”