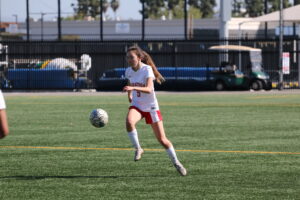 Recap: The team placed first in the league, which the Falcons attribute to club players choosing to join the school team.

Although the girls’ soccer team lost three starters to graduation, the Falcons hope to carry forward last year’s outstanding 11-1 record. Not enough players tried out to make a JV team this year, so some players were cut during varsity tryouts, which lasted from Nov. 2 to Nov. 15.

“I think we have a strong, competitive group, so I am excited to work with them,” head coach Ben Maxwell said. “If they can take their training into the games, we will do well.”

Maxwell has coached soccer for 15 years in both Scotland and the U.S. and has coached girls’ soccer at the school for 10 years, during which the team qualified for CCS five times.

“I have high hopes for this upcoming season,” Foley said. “Our team is still young and has developed a lot during and since the pandemic season.”

Foley is excited for the course of the team: With the addition of new underclassmen and senior Anjali Nuggehalli, an Elite  Clubs National League (ECNL) player and Pomona College commit, the team will start their season with their first game on Dec. 4 against Piedmont Hills.