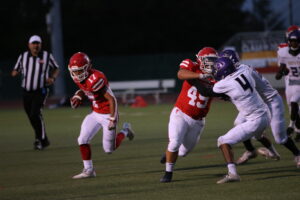 The league football season kicked off triumphantly with a Homecoming game win on Friday, Sept. 24 against Monta Vista, followed by a disappointing loss to Gunn High School on Friday, Oct. 1.

Coming off their first win during the Homecoming game, the Falcons lost 49-0 in an away game to Gunn. The Falcons are currently 5th in the El Camino League, ahead of Monta Vista and Lynbrook.

Junior running back and wide receiver Paolo Navarro partially attributed the loss to the fact that players were tired leading up to the game against the Gunn Titans due to fatigue from numerous events during Homecoming week.

Additionally, the team has been affected by a small roster and lack of experience, with many of the junior athletes having missed out on play time in previous seasons. Navarro started playing football in his freshman year, and was unable to play for half the JV season due to a sprained ankle.

In his sophomore year, pandemic restrictions did not allow the JV team to play as much. Navarro also had to swap into the varsity team as a backup due to Tyler Chaffin, a Class of 2021 alumni running back on the varsity team, getting a hamstring injury. He played two JV games and two varsity games — the last varsity game was canceled because of a COVID-19 case on the team. Navarro said that the situation is similar for many other players on the team.

For Navarro, the loss to Gunn was disheartening and demotivating, especially since the team had hoped to carry their momentum from their previous win.

“After Homecoming, everyone was really happy, and I personally wished that this last game hadn’t ruined the happy state everyone was in,” Navarro said.

As students, parents and teachers watched from the packed stands in awe, the Falcons beat the Monta Vista Matadors 31-14 on Friday, Sept. 24, marking the crown jewel of a week of Homecoming festivities.

The team had much to prove going into the game; it was both the Homecoming game as well as the team’s first league game.

“We knew we were going to be in front of a large crowd and playing an opponent that was very beatable, so we wanted to show SHS what we were capable of,” said senior Parsa Hashemi, a team captain and wide receiver. “We’re straight up tired of all the hate we’ve received [for our past performances] and wanted to prove all our doubters wrong.”

Though the Falcons were stagnant at 24-14 in the third quarter with a possible late comeback from Monta Vista, one more rushing touchdown from Hashemi in the fourth was enough to secure the team’s first win of the season. In total, Hashemi scored three full touchdowns, four extra points and a field goal — totaling 25 of the team’s 31 points.

“This was an extremely special moment for me as I’ve been waiting for this moment since freshman year: to play in front of my school on Homecoming night as a senior,” Hashemi said. “This was such a meaningful win for the seniors. We worked so hard and to see it all come together was really rewarding.”

The team was also struggling with its quarterback, sophomore Shane Timmons, who is young and “still trying to get his bearings,” Smith said.

Smith said that they wanted to work on their offensive and defensive schemes by making blocks, limiting errors and not drawing penalties.

“We want to really focus on the little things, especially on offense, because that’s what will win us the game,” Smith said.