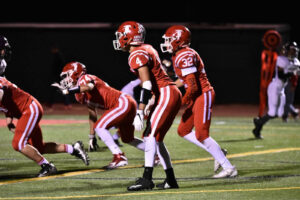 Junior wide receiver George Bian chest-bumped junior quarterback Payton Stokes after Bian hauled in his fourth touchdown reception of the game against the Gunn Titans on Oct. 12. The catch tied a school record for most receiving touchdowns in a game.

“It was pretty awesome to be able to score four touchdowns because I proved that hard work pays off,” Bian said.

As the Falcons head into their final two regular season games, they are looking to qualify for CCS in the lower El Camino division. With a 1-4 start to their first five games, including a heartbreaking Homecoming night loss on Sept. 21 to Santa Clara, the Falcons have bounced back with three straight wins: two comfortable wins — 48-34 against Gunn and 48-31 against Mountain View on Sept. 28 — and a 55-29 thrashing of Monta Vista on Oct. 5.

The Falcons, now 3-1 in league, sit in second in the standings. They are behind only 3-0 Santa Clara but are tied with Mountain View, whom the Falcons have an advantage over due to a head-to-head victory.

During the last two games of the season, the Falcons will face the 4-4 Los Altos Eagles at home on Oct. 26. Los Altos moved down to the El Camino League with the Falcons this year. On Nov. 2 they will travel to face the winless Lynbrook Vikings, who have scored a measly 27 points in seven games. Last year, the Falcons’ only win was against the Eagles, a 41-12 rout in the last game to salvage an otherwise winless season.

“I think the rest of the season should be just like the last few weeks because we have a great momentum going forward from the positive energy the offense has sparked in our team,” Bian said.

During the last three weeks, the offense shone with Stokes as the cornerstone. He was uber-efficient in all three games, passing for 1,132 yards and 15 touchdowns while only giving up one interception. He also managed to churn out 220 yards and four touchdowns with his feet.

None of the other offensive players slacked either. Bian and junior wide receiver Max Muilenburg helped carry the team with big games receiving — 403 yards and five touchdowns for Muilenberg and 390 yards and seven touchdowns for Bian through the three games — and senior running back JJ Wang kept the ball moving on the ground. Wang was out briefly and had only one carry against Monta Vista, but came back with fire against Gunn.

“I’m happy and excited that we’re finally getting together as an offense,” Stokes said. “The offensive line is blocking and the receivers are making catches and our stats show that we’ve been working hard and getting better.”

Stokes’s chemistry with his receivers seems to be coming along well, especially with Bian and Muilenburg. An example of this came in the second quarter against Monta Vista, where Stokes threw a 47-yard touchdown to Muilenburg, placing the ball ahead of the defender so only Muilenburg could catch it.

“Last year, we started working out outside of school and ever since then during practice we just clicked,” Stokes said. “We talked about where I want to throw them the ball, so the chemistry works out well.”

The team has also seen a reduction in turnovers. Stokes attributed this to the fact that the team has gotten more comfortable with each other. Because the offense is so young, he said, the team lost the ball more often early on as they did not have enough time to adjust to a higher level of play.

The defense did the rest of the work to keep the Falcons in the lead. Senior linebacker Justin Yagobi has been flying all over the field, leading the team in tackles with 15 against Gunn and 80 on the season. The defense as a whole followed this type of play by causing turnovers and pressuring the opposing teams’ quarterbacks.

After an injury scare to junior defensive lineman Will Seifert during the Homecoming game against Santa Clara, he is back in action and making an impact on the defense. After a short two-week hiatus, he had eight tackles, a sack and a fumble recovery against Monta Vista. His fumble late in the fourth quarter ended up sealing the game for the Falcons.

The Falcons’ hopes are high for the end of the season. With two games left on the schedule, they are looking to finish the season strong and make a deep CCS run.

“We’re going to dominate the other teams and keep doing what we do and go into CCS and hopefully win it all,” Stokes said.