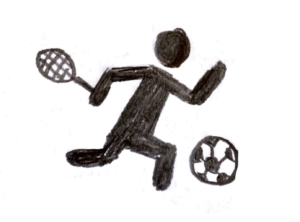 Permalink
All of our sports teams this year deserve praise, but these are the teams and players that truly stand out.

All things considered, school sports have seen massive success bouncing back from the pandemic. The Falcon is spotlighting a few of the school’s most outstanding athletes along with their achievements earned through the year.

Despite being only 17, senior Adrian Mar plays badminton among world class athletes. Apart from placing first in CCS for boys’ singles and helping the SHS team place second overall, Mar represented the U.S. in the 2022 Thomas Cup — one of the most prestigious tournaments for badminton players. He also won his last national junior tournament, placing first in boys’ singles and mixed doubles. This win qualified him for the Pan Am Junior Championships and World Junior Championships, where he will represent the U.S. in the Dominican Republic and Spain, respectively, as he has in previous years.

Agility and power is Mar’s forte on the court: His ability to move around and hit hard shots enabled him to win many of his matches, he said. Looking forward, he hopes to make a name for himself on the international level through competitions. His biggest dream is to play in the Olympics.

Since starting soccer at age 5, senior Anjali Nuggehalli has seen great success: She qualified for the Elite Clubs National League’s (ECNL) highest nationally ranked team, De Anza Force. In addition, she is committing to Pomona College for Division III soccer, a school she has hoped to attend since her freshman year.

Nuggehalli began playing competitive soccer in 4th grade for De Anza Force ECNL and joined the school team in her senior year. Her greatest strength in the sport is her tenacity as an outside defender, she said. For her role, she plays as part of the backline outside, a role that makes her responsible for the wing and helping with attacks. Over years of experience, she has developed strong leadership skills.

“I’ve been playing [soccer] for so long, but I’m still learning and there are a lot of areas where I’m looking to improve,” Nuggehalli said. “I hope to continue to grow when I play collegiate soccer.”

Although not nationally famous, senior track and field captain Harrison Dance, who primarily runs 800-meters, 1600-meter and 3200-meter events, on April 3 broke the school’s 1600 meter record previously held by Steven Sum in 2015, of 4:14:61, with a time of 4:12:12. He attributes his success to coaches and teammates who motivated him to be his best.

Dance committed to joining UCLA’s Division I Track and Cross Country program, receiving a full scholarship. He looks forward to continuing his high school success as a college athlete.