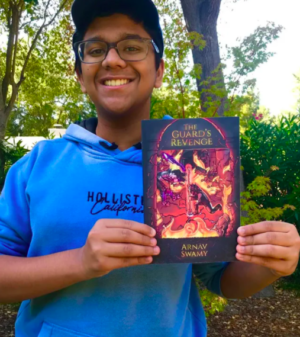 Sophomore Arnav Swamy anxiously checked Amazon’s package-tracking until the parcel finally arrived on his doorsteps in early August. He tore it open to reveal “The Guard’s Revenge,” a paperback he wrote and self-published.

“You have no idea how happy I was,” Swamy said. “I was crossing my fingers, hoping my book would turn out looking good, and it did. It was one of the best moments of my life.”

Swamy said he began writing at age 6, when his mother encouraged him to start a blog that was essentially a compilation of everything he wrote. He found the blog to be an outlet for him to express himself, so he maintained the hobby. However, Swamy wanted to test himself with a bigger project.

The idea for his fantasy novel originated when Swamy was in sixth grade. The plot was inspired partly by the video game “The Legend of Zelda: Breath of the Wild” and partly by other fantasy stories. At the time, he was not as serious about writing. But by eighth grade, Swamy decided to get help in the form of a writing coach. Through a friend, he learned of Valerie Estelle Frankel, the author of more than 50 books.

“I realized I was writing before I even understood what I was trying to write,” Swamy said. “Ms. Frankel helped me construct a proper structure in my mind. She asked me questions like ‘what does this scene do?’ and ‘does the protagonist gain anything?’”

Swamy said one important moment in his exchange with Frankel occurred when she said that she would not force him to write his book or assign homework, saying it was his job to be proactive.

“I realized I need to stay genuine and true to myself when I’m writing,” Swamy said. “If you're going to write a book, do it for yourself, because that's when you feel the proudest. That feeling is not replicable.”

With renewed energy and the desire to improve, Swamy decided to rewrite the first half of his book and continued writing the rest from there. It turned out to be 52,000 words covering 140 pages and telling the story of a teengaer’s adventures in a fantasy kingdom in search of his lost father.

Well into his freshman year, Swamy was working on his novel when the COVID-19 pandemic hit. He described the pandemic as both “a blessing and a curse.”

While quarantine gave Swamy time to think about why he was writing, it also sapped him of energy and inspiration. He had to push back the deadline he had set for himself by three months after experiencing a major writer’s block in April.

Luckily, he received support from his family and friends.

“I got a lot of inspiration and encouragement from my 10-year-old brother,” Swamy said. “He kept telling me ‘you're so close, man, just do it.’”

Upon finishing the manuscript in late July, Swamy began to look into the publishing process. He asked sophomore Carolyn Pyun for help with drawing the cover art for the book, knowing she was skilled and enthusiastic about art.

Pyun committed about 32 hours over a period of a month and a half to perfect the cover art because she wanted to create something that would match the years of effort Swamy put into writing his book, she said.

“It was especially fun because I had never drawn a book cover before,” Pyun said. “This project gave me a sense of direction of what to draw whenever I wanted to relax. When I saw my art printed, I thought it was so cool to see my art in real life.”

Meanwhile, Swamy decided to use a program from Amazon called Kindle Direct Publishing (KDP), which allows authors to format books and then advertise it on KDP’s website for free.

Swamy found KDP to be reliable except for its Cover Creator program. He was worried that the cover Pyun designed would go to waste because it might have the incorrect dimensions, the wrong resolution or slight blemishes. Swamy said he spent six or seven hours a day for almost two weeks working on the uncooperative program. Then, he spent a day or two designing the manuscript margins, the title and the inside cover page.

Swamy was surprised by the support he received once he posted on Instagram about the publishing of his book. He earns $3.50 for each paperback and $2 for each eBook sold. So far, Swamy has sold 21 print copies and eight eBooks.

In the future, Swamy plans to enter some of his works in competitions to see where he stands, he said. He is also working on teaching a fiction writing seminar for kids as his Eagle Scout project. His main goal, though, is to write another book before his senior year because it has taught him so much.

“Publishing this novel taught me that no one's going to hold my hand whenever I do something,” Swamy said. “It made me mentally tougher, now that I know if things don’t go my way, I need to push through it.”