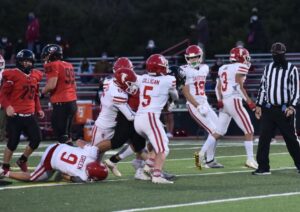 Football players tackle an athlete on the opposing team in a game against Gunn. The Falcons ended up losing 58-21.

In a year where the possibility of sports was uncertain, Season 2 sports have faced disappointments ranging from low participation to COVID-19 quarantines to a shortened season. Still, the athletes have prevailed and are satisfied with their performance.

Despite COVID-related challenges, the badminton team finished fourth in league with a record of 5-7.

Since many senior athletes who already fulfilled their P.E. credits didn’t participate, the team started off each game with an eight-point deficit; however, according to junior team captain Enoch Jung, they overcame this hurdle with a positive mindset and key additions from the freshman class.

The team, led by new coach Jatin Sharma, ended third in league with a record of 6-3. Though it is Sharma’s first season coaching the team, players said they loved his excitement at their progress and his supportive nature coupled with his knowledge in the sport.

The Falcons concluded their season with a 25-22 win against Fremont on April 9. Due to a positive test for COVID-19, the team was put into a 10-day quarantine, forcing them to forfeit their last game vs. Westmont. Including the forfeit, they finished third in the league with a 2-3 record.

Despite their shortened season, some seniors had notable achievements: Quarterback Grant Petters maintained a completion rate of over 50 percent each game and finished with a quarterback position over 100 and wide receiver Ryan Gilligan finished in the top 10 for CCS and third in the league for receiving yards.

Due to the team’s poor record in recent years, Dorling’s main challenge was building up players’ confidence. Throughout the season, they focused on implementing new drills with the goal of improving game performance. With a positive attitude, they seized learning opportunities given by the season and gained experiences to build upon next spring.

Earning first place in league, the Falcons ended their season with a 10-1 record. Head coach Ben Maxwell attributes their success to a combination of their drop to the lower league, hard work and experienced athletes.

One of their star players was senior center back Michelle Lim, who is committed to play DIII soccer at Wellesley College. Other key players included freshman center back Lauren Sun and midfielders freshman Kate Oberhouser and sophomore Gabi Golko.

The girls’ tennis team concluded their season with a 5-7 record, and athletes walked away with strong friendships with their teammates.

The girls’ volleyball team finished fourth in league with a record of 6-4. Head coach Brendan Wang, who traditionally had been the boys’ volleyball coach, led the team with new plays and helped them come together to play cohesively in his first season coaching the girls.

The team faced challenges in terms of having little time to work on athletes’ skills due to the condensed sports seasons. They also struggled with lower participation with the loss of valuable players to graduation and COVID-related reasons, along with some athletes juggling between conflicting club and school seasons; thus, some players were on both the varsity and JV rosters.

Despite the challenges faced, players said they relished the chance to return to competition.