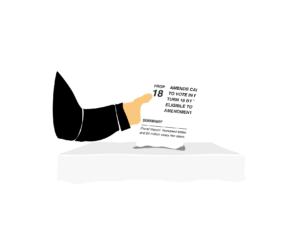 The 2020 presidential election saw a record voter turnout this past November with the participation of nearly 160 million individuals, a stunning reversal of the usually low voter turnout in past elections.

As humanitarian and political issues grow increasingly prevalent in mainstream media, more and more young adults have picked up the cause for community and nationwide change, be it through social media posts or physical ballots. This culminated last November in calls for young voter engagement in the primary elections.

But California’s Proposition 18, which would allow 17-year-olds who would turn 18 by election day to vote in primary elections, was defeated by 55.7 percent of voters. Voters’ refusal to pass this measure suggests future teens may continue to remain relatively removed from politics and its involvement in their futures.

Young adults should learn regular voting habits sooner rather than later. By allowing 17-year-old teenagers to vote in primary and special elections, younger generations will cultivate an earlier appreciation for the voting process and state politics.

A 2019 study from Tufts University estimated that only 23 percent of eligible voters under the age of 20 cast ballots in the 2018 midterm elections. Granting eligible 17-year-olds the responsibility of voting in the primaries would allow more to start their research early, engage in civic leadership and take greater action in their communities.

Having the ability to participate in primaries would also encourage younger voters to educate themselves on their voting choices. Allowing the 17-year-olds to vote would not only lead to higher voter turnout, but it would create a larger population of more informed voters who understand what their ballots mean.

In recent years, teens have been getting more involved in political matters.

The use of social media outreach and activism to spread local issues, coupled with more political involvement at a state and national level through primaries, could also push young voters to invest in politics at a county level. With more people aware of local political issues, the likelihood they’ll be acted upon increases, as local governments face pressure from passionate young voters.

Seventeen-year-olds can already vote in congressional or presidential primaries in almost 25 states; by allowing this demographic the ability to vote, California would have been simply following a growing trend to increase voter involvement. They would already be eligible to vote for their presidential candidate in the general election, so excluding them from the primaries makes little sense.

Most importantly, allowing 17-year-olds to vote lets the younger generation have more say in policies that will affect their lives. Even though only a handful of eligible 17-year-old voters are added under the proposition, encouraging more young voter turnout is beneficial no matter how slim the influence.

Younger generations are more in-tune with the impact of current issues on their generation. In an election, every vote is crucial. As it stands, these bright young people have to sit on their hands and wait until after the primaries to be able to vote, and by then, it’s more than possible their choice candidates have been voted out during the primary by the older generations.

Although it failed on the California ballot this November, the state should put Proposition 18 back on the ballot in 2022. Empowering and driving social change in America is no easy task, and it should begin with allowing eligible young adults an earlier say in their futures.