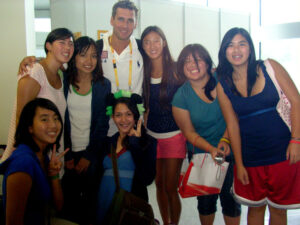 For most Saratogans, the Olympic Games meant sitting around the couch watching Michael Phelps win his eight gold medals, but for the families of sophomore Mansie Cheung and junior Kandice Wong, the 2008 Beijing Olympics was the experience of a lifetime.

For most Saratogans, the Olympic Games meant sitting around the couch watching Michael Phelps win his eight gold medals, but for the families of sophomore Mansie Cheung and junior Kandice Wong, the 2008 Beijing Olympics was the experience of a lifetime.

For the past three years, Wong and Cheung had participated in Camp International, a language and cultural immersion program, which helped them prepare for the games.

“It was fun, especially with all the other people in the camp,” said Wong. “There were 35 of us, so there was always someone to talk to.”

As volunteers from the program, they spent their three weeks documenting the Olympics.

“One of the major projects we participated in included photojournalism with Professor Deng Wei,” said Cheung. “We were to capture moments of unsung heroes doing their part for the games.”

Apart from their photojournalism project, they were volunteers for traffic control around the games.

Besides from volunteering, Wong and Cheung were able to watch various sports events as well, including the preliminaries for handball, volleyball and water polo.

“The feeling of walking into the stadium is pretty amazing,” said Wong. “It’s just like ‘Wow, I can’t believe I’m actually here, watching an Olympic event.’ I mean, even though it was ‘just prelims’, it’s still really cool, and tickets were pretty inexpensive.”

The volleyball game between Brazil and the U.S. proved to be eventful for the two of them.

“It’s definitely different watching a U.S. team from watching teams from different countries. It’s still interesting if it’s another country, but if it’s the U.S., you just feel a lot more excited about it,” said Wong. “The U.S. team won, so that was great.”

What excited the two of them the most, however, was meeting the sports stars after their games.

“When we were leaving after the last game, we saw an athlete who turned out to be the U.S. team’s water polo goalie, Merrill Moses,” said Wong. “It was really cool that we got to meet him, and he was really nice. He took pictures with us and signed our tickets.”

As Chinese-Americans, both Cheung and Wong were excited to finally represent their Chinese culture in some way at the Olympics.

“I knew since I was young I had always wanted to see the Beijing 2008 Olympics,” said Cheung. “When I watched the Opening Ceremony, I felt so proud of my own culture. Only thousands of years of culture can lead to such a stunning performance.”