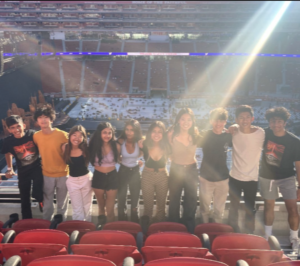 Permalink
Belting “Die for You” in a stadium filled with thousands of random people was the time of my life.

As I nervously walked to the top row of Levi’s Stadium with my friends, clutching my $9 garlic fries, I realized if I fell off the stands, I would have the most epic death ever. The Weeknd concert at Levi’s Stadium on Aug. 27 was my first concert and I had no idea what to expect. The show was fully sold out, with over 50,000 fans anticipating Abel Tesfaye’s arrival to the stage.

The opening acts of the show were Mike Dean and Snoh Aleagra, two artists I did not previously know. Dean was rather unimpressive, repeating the same music on his electric guitar while smoking a cigar. However, Aleagra’s music was something I gushed over, prompting me and my friends to instantly search up her songs on Spotify. Her amazing range and her silver, almost holographic outfit fit perfectly with her subtle yet powerful vocals.

I thought the Weeknd would play right after the openers, but it took what seemed like hours for him to make his debut. When a moon inflatable on the back stage started to blow up and rise a couple feet into the air, everyone in the stadium screamed at the top of their lungs, eager for the Weeknd’s arrival to the stage. However, many teases like the random gushing of air, smoke and lighting changes occurred before he came out from the stage set up resembling a city — they eventually got annoying, and everyone was just sitting in the stands waiting for something to happen.

Throughout his first song “Alone Again,” he wore a mask on his face, leading to a dramatic face reveal during his next song, “Gasoline.” Naturally, the stadium went crazy, given that many — not just me — had been waiting months for this moment.

While there were some songs I definitely didn’t know the lyrics to, I was still jumping and dancing like I knew every word. The parents sitting in front of me looked bored out of their minds, while their son sang at the top of his lungs with me, my friends, and the thousands of fans alongside us.

My favorite songs from his concert were “Save Your Tears” and “Die for You,” performances filled with colorful lights flashing through the stands, people screaming everywhere and my friends surrounding me in the surreal experience.

The best part about the Weeknd’s songs is the way you can scream the lyrics while driving at night, your windows down and no one around to hear you. The lyrics of his songs are extremely catchy with amazingly timed beat drops, fitting with his choruses. Hearing his songs live was an experience I will never forget — I am more than happy to say (or brag, just a little) that the Weeknd is the first artist I’ve ever seen live in a concert that was absolutely incredible.