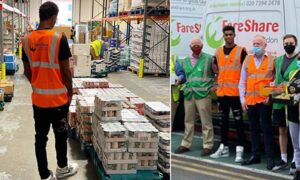 Rashford works with FareShare to provide free meals to struggling families in the U.K.

At 23, English soccer star Marcus Rashford is part of an elite club of which few can claim membership: the Order of the British Empire. Those who make significant contributions to British society are admitted to the Order.

Rashford makes nearly $14 million a year. He joined Manchester United’s youth academy at the age of 8, and at age 18 was named to the club’s first team. Despite his talent on the soccer pitch, Rashford received this honor for work outside of the sport. For the past eight months of the COVID-19 pandemic, Rashford has been campaigning with the charity FareShare to help stop child hunger in the U.K. His donations to the charity helped millions of families receive meals, according to FareShare’s website.

Rashford said his own struggles with food insecurity growing up pushed him to advocate for the continuation of free school meals and vouchers over the summer. He grew up in a single parent household in Manchester, England, with four other siblings, so having enough food wasn’t always a given.

“As a Black man from a low-income family in Wythenshawe, Manchester, I could have been just another statistic,” Rashford wrote in his June letter to members of the U.K. Parliament. “Instead, due to the selfless actions of my mum, my family, my neighbours and my coaches, the only stats I’m associated with are goals, appearances and caps.”

Rashford’s global fanbase, including those at the school, have felt inspired by his actions.

“Marcus was my favorite player even before he took off with this campaign, but this initiative and determination through which he's executed his goals has only reaffirmed the fact that he's my favorite player and inspired me as a person,” Iyer said. “I'm so happy to have him on the team I support."

Rashford’s voice extends far beyond Manchester United fans, as fans of other teams are similarly inspired by his actions.

“It’s inspiring that he didn’t forget where he came from,” said freshman Samik Pattanayak, who supports the English team Arsenal. “He’s helping to give back to the same communities that helped him get to where he is now.”

Pattanayak said that while many have criticized vocal professional athletes for making empty statements and not following through with their actions, Rashford is one of the rare few figures who has used his or her voice to force a change. Although Rashford wasn’t alone in his efforts, and his presence may not have been the primary cause for change, his popularity was a major factor in the policies that Parliament implemented.

His influence as a star player on Manchester United, one of the most popular soccer teams in the world, helped raise public awareness regarding child hunger and influenced Parliament to take action. In part because of Rashford’s efforts, Prime Minister Boris Johnson eventually introduced a $161 million food fund over the summer to help children affected by the COVID-19 pandemic.

In November, Johnson introduced a $227 million program to help struggling families over the winter. Johnson also extended the government-backed holiday activities and food (HAF) program through Easter, summer and winter school holidays of next year.

“There is still so much more to do, and my immediate concern is the approximate 1.7 million children who miss out on free school meals, holiday provision and Healthy Start vouchers because their family income isn’t quite low enough,” Rashford said. “But the intent the government has shown today is nothing but positive, and they should be recognised for that.”