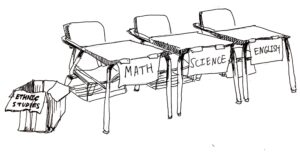 In its current form in its first year at SHS, the ethnic studies course is only one semester and is offered to freshmen exclusively. In a single-semester course, some topics or events will inevitably be oversimplified, misrepresented or even skipped, no matter how skilled our teachers are. Seeing as the bill was redrafted to include Sikh, Jewish, Arab and Armenian Americans, it is obviously important to lawmakers that as many ethnic groups as possible are sufficiently represented, which makes the single semester course more ironic.

Because of this time constraint, the Ethnic Studies course is fast-paced — especially for a freshman — and students taking the current iteration of the class experience a much higher workload compared to World Geography.

Additionally, students here so far have mostly shied away from the class. Due to a combination of social stigma, parental pressure and lack of interest in the class or lack of knowledge about the course, roughly 60 freshmen out of 285 chose to enroll in Ethnic Studies over World Geography this year. Whatever the reason, forcing students to enroll in a class that they dislike will do more harm than good.

In the best-case scenario, some students will not pay attention or take the content seriously. In the worst case, students will act disrespectfully, joke around and in general make the experience of the class worse for people actually interested in it. In fact, mandating enrollment in an Ethnic Studies course may cause the opposite of what lawmakers want to achieve, influencing some students to take lightly legitimate issues in society.

These problems can be solved by going with a full-year course. This will allow teachers to take their time and cover all the information thoroughly. Additionally, this will give it legitimacy as a class, as well as preventing students from viewing Ethnic Studies as something they can halfheartedly cruise through for 18 weeks and never worry about again. Even though this option will eliminate Health/Driver’s Ed, the administration could move the content of that class into Advisory or cover it in some other way.

Ultimately, considering the importance of the subject matter, requiring one year of Ethnic Studies will solve more problems than it creates.