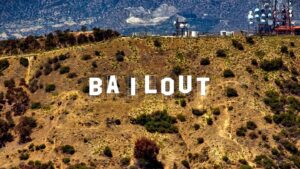 The U.S. is often referred to as a melting pot of cultures, with no culture of its own. Despite not having singular customs, beliefs or religions, the U.S. does have a dominant media culture: Hollywood, Broadway and Nashville, all various forms of American entertainment.

But due to the pandemic, lockdowns and economic uncertainty have put the American entertainment industry at risk of collapsing, with no end in sight.

The U.S. government must bail out the entertainment industry or risk permanent damage to its culture and international influence.

Americans are different in many ways, but the one thing that unites all Americans is entertainment, which is the country’s de-facto culture. In terms of influence, American music, movies and shows also dominate internationally.

According to Box Office Mojo, the 10 biggest movies of 2019, grossing over $8 billion overseas, were made by American studios; the five biggest songs on Spotify in 2019, streamed over 5 billion times, were recorded by American artists; and the highest grossing theater show worldwide was “Hamilton,” which is about an American founding father. American entertainment spreads American ideals and messages worldwide, and is essential to U.S. influence around the globe.

But the pandemic has ravaged this industry. AMC Entertainment, which owns 7,967 movie theaters screens in America, says it will run out of money in early 2021. Countless concert venues and Broadway theaters have closed their doors or plan to soon. Even the largest entertainment companies have been hurt, like the Walt Disney Company, which lost $2.8 billion over the year.

If the government doesn’t send money to bail out this industry, it will run out of money and be significantly hurt. And it’s not like the government hasn’t bailed out other big, previously successful industries.

The government gave airlines $25 billion in April, and another $15 billion in the recent stimulus bill. Airlines are predicted to lose $100 billion as a result of the pandemic, compared to $160 billion for just Hollywood, one component of the entertainment industry. Despite more losses than airlines, the government hasn’t given similar aid to the entertainment industry.

The recent stimulus package includes $15 billion in relief for struggling theaters and venues. Still, this doesn’t include major companies like AMC Entertainment, and it is hardly enough considering the losses that the industry is facing. And while streaming services have excited some investors on Wall Street, it’s only a temporary solution; the largest money-making verticals like theaters, album sales and theme parks are not online. The success of streaming is not an excuse for a lack of a bailout.

If America wants to save its culture and international influence, it must bail out its entertainment industry immediately. If it doesn’t, the industry may never be the same.