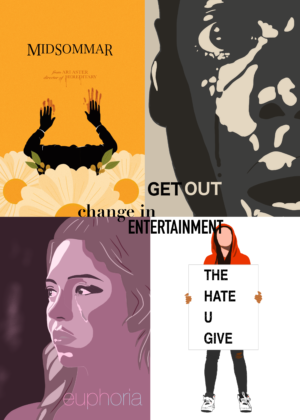 From the horror movie “Us” criticizing the racist double standards of the American Dream to the Oscar-winning movie “Roma” advocating for gender equality, an increasing number of films are raising awareness about pressing societal issues.

Directors and writers typically highlight these issues through documenting characters’ lives and sometimes base their shows on their own experiences.

Take, for instance, the multifaceted issue of drug abuse depicted in the TV show “Euphoria,” released in 2019.

“Euphoria” focuses on a realistic path of recovering from addiction. The story revolves around Rue, a recovering drug addict played by actress Zendaya, as she goes through withdrawals, relapses and tense relationships.

This TV show is inspired by series creator Sam Levinson’s personal experiences.  “Somewhere around the age of 16, I resigned myself to the idea that drugs could kill me, and there was no reason to fight it; I would just let it take me over and I'd made peace with that,” Levinson told the Hollywood Reporter.

“Euphoria” also offers countless perspectives that emphasize the complexity of drug abuse as a societal issue: The show tells the story from the points of view of the drug dealer, the addict’s friends and the addict’s family, showing the multidimensional and widespread effect addiction has.

To its credit, “Euphoria” accurately describes the complexities of the issue rather than glorifying the abuse. By contrast, in the movie “Project Power,'' those who take a drug receive five minutes of superhero powers. This representation implies that drugs are a kind of a superpower, when in reality,  drugs like heroin are dangerous, deadly and have the ability to ruin lives.

That’s why accurate portrayals of the increasingly prevalent problem of drug abuse are so crucial, especially for high schoolers who will have to make life-affecting choices at parties or other situations.

Besides drug use and abuse, the film industry has been swept in the tide advocating against racism generally and police brutality.

An impactful example in this category is the 2018 movie “The Hate U Give” — based on the Angie Thomas book — in which a police officer pulls over and shoots a 17-year-old Black boy named Khalil.

This movie explores the impact of Khalil’s murder and exposes the judicial bias in favor of law enforcement as the jury acquits the officer. While its main topic is police brutality, it also depicts the effect gangs have on Black communities and stereotypes used to justify their racism and violence toward African Americans.

With the Black Lives Matter movement garnering more support since the horrific and brutal death of George Floyd nearly a year ago, entertainment is one place where we can begin to understand and process the complex issues and histories of our imperfect society.