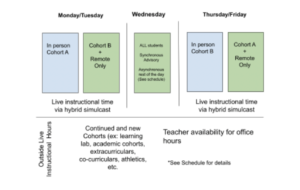 Phase 3b will allow students to choose between either in-person or online school, with students that choose to return to school coming on to campus two times each week, in either a Cohort A or Cohort B.

Roughly half of the student population has indicated that they will consider returning in person.

Results from the March 15 survey indicated that roughly 50 percent of students will be returning to school for Phase 3B, with the remaining either choosing to remain remote due to health concerns or because they prefer remote education over in-person education.

The series of Google Forms surveyed students’ decisions to either return to campus or remain remote during the Phase 3B re-opening, beginning on April 12.

The survey’s main purpose was to assess the reasons families chose to remain remote, help determine the size of cohorts for the master schedule of Phase 3B and to make sure classrooms did not exceed the county guidelines for social distancing.

Phase 3B allows students to have the option to return in person for two days each week or continue remaining remote. According to assistant principal Kerry Mohnike, the model is intended to keep families with more than one student attending SHS in the same cohort and make student numbers work schoolwide. Mohnike added that while each individual class may not be evenly balanced as a school and for all seven classes, the cohorts provide reduced health risk as well.

The survey also revealed that roughly 7 percent of students say they don’t want to return to school regardless of how safe the county is, even if the county returned to the yellow tier with minimal risk.

Among these students is junior Kunal Srivastav, who said that he would prefer to remain remote because of his preference for online schooling.

“Right now, since we’re already so far into the year, we shouldn’t randomly shift back to in-person when we’ve already adapted to new methods of studying while online,” Srivastav said. “If given the chance next school year, I would absolutely return, as long as it’s at the beginning of the year and I have time to adjust my methods of studying over the summer.”

Other students among the 7 percent described how they would like to maintain the normalcy of a daily schedule of Zoom classes for the rest of the semester, according to the survey.

There are also students who have decided not to return to phase 3B due to health concerns, citing the risk of contracting COVID-19 that comes with returning to in-person school, even with the school’s reinforced safety protocols.

“I’m not returning because I do not trust the student body following protocols off campus, let alone on campus,” junior Noora Fayad said. “Students already openly hang out with each other without social distancing or wearing a mask.”

Fayad said that both her parents are medical professionals who work with COVID-19 patients, so they have strictly followed the safety protocols but have not seen the same from others.

In order to address such safety concerns, Mohnike said that the school has implemented many different policies to ensure the best transition for students from remote learning with regards to both safety and education. Whether students choose to remain at home or in person, the school has put in the necessary measures to make student education as accessible as possible, she said.