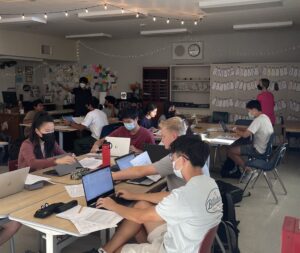 Photo by Neal Malhotra
Laws, who started at the schools in 2021 with English 9 and 10, is now the adviser for the Talisman.

English teacher Megan Laws has assumed the role of Talisman yearbook adviser this year. She replaces Michael Tyler, who last year announced that he would hand over the reins of the publication after 25 years.

Laws, who started at Saratoga High in 2021 teaching English 9 and 10, previously advised the yearbook staff at Scotts Valley High, allowing for a smoother transition as the adviser for the Talisman.

Tyler said there were many reasons behind him stepping away from the yearbook.

“I was the adviser for a long time, which is very uncommon to see, and now I think it’s time for someone else to bring their vision to [the yearbook],” he said. “I’m toward the latter part of my teaching career and will retire in the next few years. It’s really important to get another teacher so that when I retire, there will be some continuity.”

According to Tyler, the role of the yearbook adviser is a “burnout position” for most individuals, so in recent years, he hoped the school would hire a teacher that could do a good job taking over the role while simultaneously fulfilling their duties as an English teacher.

When Tyler first started teaching at SHS in 1996, he was given the responsibility of the entire journalism program, including The Falcon, the Talisman and the introductory Journalism 1 course. Having Laws take over the yearbook position is the first step in how this model will be changed.

One hope for the English department is to make the program less dependent on a sole individual for both the yearbook and newspaper and instead have multiple advisers, Tyler said.

Laws noticed a number of differences between her previous yearbook classes and the Talisman, the most notable of which was the Talisman’s predominantly student-led class structure. The yearbook editors-in-chief — seniors Haley Marks, Eva Ruemmler, Ritisha Byri, Gloria Pan and Isabella Marty — are in charge of the daily schedule and curriculum while Laws oversees the overall process.

With this being her third year as part of the Talisman staff, Marks has noticed differences in Law’s teaching style as compared to Tyler’s.

“I think [Laws] is putting a lot more emphasis on team building and wants to bring some diversity into the curriculum,” she said.

One of the biggest challenges Laws immediately encountered was the yearbook staff’s dwindling enrollment over the past few years. Last year, the school combined the Journalism 1 class with the yearbook class because the yearbook staff had only 12 returning members, leading to a total staff of 34. This year, the combined staff has grown to 44 students, most of them freshmen.

Marks has seen that the staff doesn’t have as much experience as she would like them to have because of the combined format.

Last year, freshmen sometimes struggled to keep up with learning journalism skills and creating the yearbook simultaneously. To remedy this, Laws is working with the editors-in-chief this year to incorporate more mini-lessons for new yearbook staffers.

“We want to get them all the basics and everything right the first time,” Laws said. “So the goal is to eventually have a smooth process where new students can write stories and develop layouts with ease.”

In addition to staffing issues, the yearbook program struggled during the COVID-19 pandemic due to low sales, leading to debt owed to the Walsworth Publishing Company. To the program’s relief, the school was able to reach an agreement with Walsworth and they are now in a position to pay off the debt. Sales also rebounded for the 2022 yearbook and are so far strong for the 2023 book, with over 700 ASB packages sold already.

Laws is trying new methods to increase the sale of yearbooks, including running color ads in principal Greg Louie’s weekly Friday newsletter to promote the yearbook. As the year progresses, Laws also wants to add flyers around the school and run more sales on yearbooks.

Laws is hopeful for the future of the yearbook class.

“I hope that we can maintain the structure and organization that [Tyler] has put in place because it’s a very well-oiled machine,” she said. “I also hope that I can infuse my own sense of creativity into [the yearbook] and continue to build up the program that’s been running for a long time.”