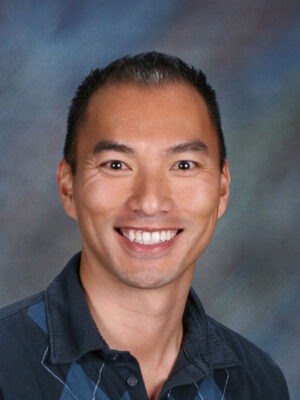 The problem with interviewing English teachers is that the answers they provide are often miles better than anything you could write. What began as a basic profile of English 10 and AP English Language teacher Ken Nguyen (pronounced “win”) quickly morphed into a tale of epic proportions.

The problem with interviewing English teachers is that the answers they provide are often miles better than anything you could write. What began as a basic profile of English 10 and AP English Language teacher Ken Nguyen (pronounced “win”) quickly morphed into a tale of epic proportions.

In 1981, Nguyen’s family escaped from Vietnam in search of a better life. Though he was only 5-years-old, Nguyen remembers fragments of the journey, such as “a lot of vomit and seasickness” and peering through binoculars with his father, awaiting the moment when they would “see the speck that would eventually become [their] rescue.” Nguyen also recalls “seeing blond people for the very first time in America and asking [his] parents about the strange people with ‘yellow hair.’”

Nguyen moved throughout the country as he grew up, living in places such as Louisville, Ky., New Orleans, La., and various suburbs in the Seattle area. He took bilingual classes in kindergarten and first grade but did not find the transition to English difficult, picking up the language quickly and easily due to the great number of books that he read. Nguyen attended Renton High School in Seattle.

Nowadays, Nguyen enjoys cooking, especially making a “mean bowl of pho from scratch,” as well as traveling throughout the U.S. in addition to Europe and Asia, and reading blogs “about movies, books and politics.”

Q: What were you like when you were young?

A: If you were to hop into a time machine and go back to meet the 16-year-old me, you would discover a kid who had no inkling that one day he would become a school teacher. I was a bit of a bookworm, quiet, studious, bereft of social skills and utterly without confidence—the kind of kid who was deathly afraid of public speaking, so every opportunity to give a report in front of class or a speech was met with much fear and anxiety. Sixteen-year-old me couldn’t have imagined having to do that in front of a large group for five minutes, so as you can imagine, it would never occur to him to go into a field where he’d have to do that for an even longer period of time throughout the day. I always figured I’d end up being a writer for a newspaper or a magazine, or perhaps even something science-related since I enjoyed my science classes at the time.

Q: How did you eventually decide to become an English teacher?

A: I didn’t decide to become a teacher until a year after I finished undergrad. I remember sitting in a cubicle one night at the corporate offices of Microsoft in Redmond, Wash., thinking to myself: “Wow, I am completely bored. I cannot do this corporate thing for the rest of my life.”
At that stage in my life, much was different about me than when I was in high school. I had gotten a little more confident and sure of myself. I remember my mind harking back to the teachers I had in high school and how amazing they were. I remember thinking that I wanted to be just like them, that I wanted to give back to them in some way … and so the idea formed and gelled. I was going to go back to grad school and become a teacher. I wanted to do something with real purpose and meaning. Short of being a doctor and saving lives, I couldn’t imagine doing anything else that would give me that same sort of feeling.

Q: What are some of your favorite pieces of literature?

A: My favorite works to teach include “Lord of the Flies,” “Fahrenheit 451,” “The Stranger,” “The Things They Carried,” “1984,” “Oedipus Rex” and “Hamlet.” I just find each of them very rich experiences, not just because they offer much to talk about and analyze, but because they deal with issues I’m constantly thinking about: the nature of truth, whether human beings are noble or sick, sick creatures (and if the latter, whether or not it’s possible to be redeemed), and how much of that is within our power and control.

Q: What is your favorite part of teaching? Least favorite?

A: I think my favorite part of the job has to do with the actual teaching responsibilities, which encompasses planning lessons and agendas, creating curriculum, and the day-to-day interaction with students.

The fun part begins when you implement all of your plans and thinking with students. Something happens during that 90-minute block when ideas start to get shared and there’s this interesting back-and-forth educational process that starts happening, part of it scholarly, part of it entertainment…at least I see it as entertainment. My students are a constant source of fun and entertainment for me, so it never feels like work.

My least favorite part of the job is the grading. It’s a necessary evil, but I don’t particularly enjoy it.

Q: How have your past experiences influenced your life, teaching style, and philosophy today?

A: As an immigrant from an immigrant family, I’m pretty sure my story isn’t unlike the stories of other immigrants who have sacrificed much of their lives back home to explore a more prosperous future in another land. My parents gave up much of the life they’d known—family, friends, homeland—to come to the United States, not for themselves, but for their children.

Consequently, their values were such that they made sure that my brothers and I knew and understood that nothing in life comes without a cost. If you want to achieve your goals, you have to be persistent, you have to be driven, you have to dedicate yourself to the time and energy required to realize those ambitions. And for them, the foundation for such ambitions resided in a solid and sturdy education.

Much of my childhood and early schooling is full of anecdotes about my parents—particularly my father—pushing me to excel academically … I learned from my parents that good grades would somehow lead to material success because the better your grades, the more choices you would have. Even if you decided material success was not for you, you would still get to make that choice. It’s an important life lesson, one which I think forms one of the underpinnings of how I approach teaching. That is, I throw a lot at my students and expect them to rise to the bar I’ve set because deep down, I don’t want to be directly responsible for not playing my part in helping students give themselves as many choices as possible. If you believe that a strong educational foundation sets you free (knowledge is power, as the old cliche goes) as I do, then you do everything in your power to get your kids to that place of freedom, of choice…so they don’t feel like they’ve become boxed in due to lack of skills and understanding.

Q: Who were your favorite teachers as a student?

A: There was Ms. Ford, my ninth grade English teacher, who noticed my love of Stephen King novels and would recommend books for me to read outside of class. There was Ms. Ham, my 10th grade English teacher, the only one to recognize my sarcastic wit and humor (as it only appeared in my writing back then—I was too shy to be goofy in public, remember) and encouraged it. There was Mr. Day, who taught American Studies, a history/English block in 11th grade, as well psychology in my 12th grade, a man who seemed to me—at the time—like the smartest man alive, as his lectures about American history and literature were so entertaining and profound all at once, the way he was able to connect seemingly disparate incidents in history to pop cultural phenomenon. Not to mention that he, too, had a biting wit that no student could match (and we tried). There was Ms. Lloyd, who I am on a first-name basis and still friends with today more than 20 years later, who taught me to really see in my art and painting classes, and who opened me up to mythology and also helped me discover who I was. And Mr. Hicklin who made biology fun and Mrs. Richter, who was weird, but made chemistry comprehensible … the list goes on.

All of those teachers, combined with a handful of college professors who pushed me to think deeper than I thought I could, who pushed me to put out my best work even though I could probably skate by with minimal effort, have shaped me in pretty fundamental and powerful ways. How I conduct class and how I conduct myself with my students—these things are in some way modeled after each of them. So when I try to connect the stuff we’re studying to the stuff we encounter in life, in our movies, or our TV shows; when I crack the occasional joke; when I tease a student just to lighten the mood; when I pose questions to get students to think a little more deeply about a character in a novel; when I engage the room in conversation, debate, or discussion … it’s because I want to imitate those teachers and replicate the classroom experiences I had when I was in high school and in college.

Q: How do you try to make your classes have an impact on students?

A: Beyond just wanting to make sure that my students learn a lot so that they have more choices, I try to emphasize a lot of writing because it’s such a critical skill that everyone needs to have in life, whether or not they’re going to go on to major in English. There’s no field in life that doesn’t require a solid set of skills having to do with the ability to think and the ability to communicate.

Also, I’m fully aware that English is not everybody’s cup of tea. Consequently, I always strive to make my class fun and amusing (although there are days when that’s not possible) in order to balance out my demands. I remember loathing busy work as a student, so a constant goal has always been to try to minimize that in my own classroom. The goal is to set up a system where everything that occurs—every assignment, every procedure—has a reason to exist … a purpose and function in the larger whole.

So my hope is that students see, in time, that there really is a method to all my madness.