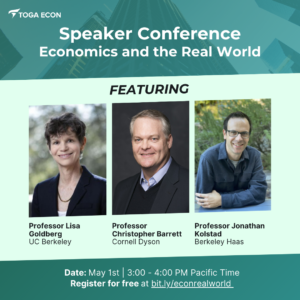 Photo by Courtesy of the Toga Econ Club

The club will host “Economics Research and the Real World” on May 1 via Zoom.

During the pandemic, Toga Econ, colloquially known as the Econ Club, has found new ways to maintain engagement with members even in an online format.

Most notably, the club began a series of semi-annual virtual speaker events starting last May when the officers invited five professors, local business owners and industry professionals to speak at their “COVID-19 and the Economy” event.

In early October, the club held an event called “A Survey of Modern Economy” featuring Stanford professor Paul Milgrom, the winner of the 2020 Nobel Memorial Prize in Economic Sciences.

The club plans to host its third installation, titled “Economics Research and the Real World,” on May 1 via Zoom. According to the club’s president, senior Henry Weng, their officer team has invited UC Berkeley professor Lisa Golberg, Cornell professor Christopher Barrett and UC Berkeley Haas professor Jonathan Kolstad to speak.

The purpose of the series is to create a platform for economics in a primarily STEM-focused school and demonstrate real-world applications of the subject.

“A lot of students think of economics as more of an abstraction, but I think this event will really show students the tangible impact that these professors are making,” Weng said. “We have a really fantastic lineup of speakers this time and I'm super excited to hear them talk about their research.”

The event will be open to everyone — and students, parents and teachers can register online.

Weng is proud of the efforts that Econ Club officers and members have made to generate a wider platform for economics at SHS. Although he is graduating in June, he’s excited for the future of the club.

“I can’t wait to see what the new officer team accomplishes in-person using what we’ve all learned throughout the pandemic,” Weng said.