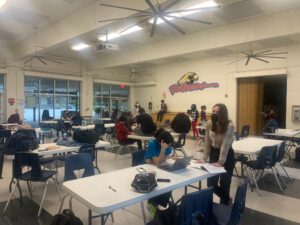 From Feb. 11-13, the student production “She Kills Monsters,” directed by senior Taylor Zhou, will be performed in the McAfee Center.

The drama-comedy, written by Qui Nguyen and debuted in 2011, tells the story of a woman grieving her late teenage sister through exploring the latter’s passion for Dungeons and Dragons, a roleplaying game.

Senior Samantha Weisner, who plays the protagonist Agnes Evans, said that the cast — consisting of 17 students who auditioned in November — were busy in the weeks leading up to the play. During the week before the play, they worked until 9 p.m. daily, sometimes practicing six hours a day. Other lead roles include sophomore Arushi Maheshwar as Tilly and freshmen Kat Aldrete, Jay Louie, Apollo Burgess and Cosmo Cooper working together to portray the Monster.

Weisner has extensive experience acting in plays, musicals and student productions, but she said none were quite like “She Kills Monsters.”

“In the drama program, we usually do more well-known or older plays, but this one’s radically different in that it’s less popular,” she said. “‘She Kills Monsters’ is a niche play, one without a reputation for us to worry about maintaining.”

For Zhou’s part, he initially wasn’t sure which play to use for the student production. While student productions are usually chosen over the summer or early in the fall semester, he was too busy with college applications to make a decision.

“It got to the point where I was making Instagram posts hyping up the reveal, when in reality I was just stalling for time while I decided on which play to do,” he said. “I eventually decided on ‘She Kills Monsters’ because I was playing Dungeons and Dragons with my friends at the time, and had so much fun.”

After selecting this play, Zhou went for “something wacky and creative” with his production because he felt that other productions of “She Kills Monsters” looked “pretty standard,” so he wanted to “mix things up.”

Zhou took inspiration from anime to design the costumes for the show. For example, the costume for Agnes Evans is designed with elements from Sir Bedivere from “Fate: Grand Order” and Bell Cranel from “Danmachi.”

“My favorite costumes are probably the costumes of the two cheerleader characters,” he said. “Originally, I had them wearing the same thing, but I changed the costumes slightly to illustrate their character traits, giving one of them cut-off sleeves and a choker, while the other wears a bow tie to show off her sophistication.”

Another aspect of Zhou’s creativity will be spotlighted in the fight scenes, which include multiple actors dancing and stabbing monsters. For the final fight, Zhou said that he showcased the dragon’s five heads — each played by a different actor representing the elements water, fire, lightning, earth and wind — through dynamic choreography as well as sound and lighting effects.

For him, “She Kills Monsters” is a farewell to his drama program involvement at the school.

“This will be my last show at Saratoga, so it serves as a send-off for me as I enter the next phase of my directing career in college,” Zhou said.

Vivienne Brooks as Farrah the Faerie