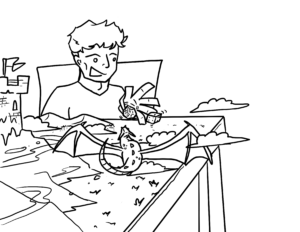 Permalink
My unique experience with Dungeons and Dragons after it recently experienced a popular resurgence.

The scene is very 1980s and pre-internet: A 20-sided dice rolls onto a table as a group of teens huddles around, anxiously awaiting the outcome. The fate of dwarf paladin is about to be determined by this one dice. If it rolls a 10 or above, the character is spared; otherwise, they die and the player is out of the game.

The dice slows down, and the tension in the room starts to simmer. Moments later, a seven reveals itself on the top of the dice. The character has died.

Dungeons and Dragons (DnD) was originally created as a wargame in 1975. Immediately following its creation, the game soared in popularity. Since then, DnD has evolved into a roleplaying game accessible and enjoyed by almost anyone, anywhere. It has enjoyed a recent resurgence because of the popularity of the Netflix series “Stranger Things,” which features playing DnD as an element of its gripping plot.

The premise of DnD is simple: After creating a character of your choosing, from an elf to a dragonborn, all you need is a paper, dice and imagination. Although there is a comprehensive rule book spelling out the basic objects, character creation guidelines and spells, most of the game’s rules are completely up to the Dungeon Master (DM), the person who controls the game progression and story.

Unlike the majority of board games, DnD relies on players’ imagination. Games take place in a setting made up and constructed by the DM, and players are free to do almost whatever they want in this imaginary world.

I recently joined a campaign led by junior Parav Manney to experience what it was like to play this game. A campaign is essentially a story arc, and it can last anywhere from a few days to months. For this campaign in particular, Manney acted as the DM.

The DM strives to be as unobtrusive as possible, letting the plot unfold by itself. However, when players wander too far out of the boundaries of the plot, the DM may have to redirect players.

For example, my party (aka, team), was on the brink of being eaten alive in a dark cave full of giant, man-eating spiders. We all had very low health and broken weapons. Acknowledging this dire situation, we decided to make a run for it in an attempt to escape the cave.

However, the DM needed us to complete the cave dungeon in order to progress the story, so quick thinking was needed. While our party was making a mad dash toward the exit, the DM made the stony roof above the entrance fall from all of the noises we were making. This blocked the exit and, as a result, we were forced to keep fighting.

In essence, DnD is as expansive as your imagination wills it to be. The game is all about imagination and storytelling. A good DM makes the gameplay as engaging and vivid as possible, mixing in concrete imagery and vibrant narration.

DnD is the perfect way to have fun with friends offline. Its open world nature and unpredictable gameplay makes the game re-playable and an offline wonder.

It is no wonder DnD experienced such a huge resurgence during and after the pandemic. After all, many people were probably burned out from staring blankly at Zoom calls all day, and this game allows you to connect and have genuine fun with friends in a truly offline and authentic way. I highly recommend giving this fun role playing game a go if you have the chance.