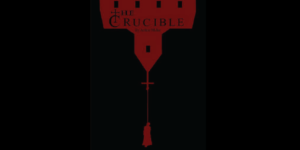 Photo by Saratoga Theatre Arts website
The drama program will be performing “The Crucible” on various dates from Nov. 12 to 19.

Permalink
The play, written by Arthur Miller, is in the historical fiction genre and depicts the Salem witch trials.

During a recent rehearsal, senior Olivia Smith said, “And mark this … I will come to you in the black of some terrible night and I will bring a pointy reckoning that will shudder you.”

Smith was cast as Abigail Williams, a character in the play “The Crucible.” Her character is in love with John Proctor, a married farmer played by senior Eli Tsives. Abigail wreaks havoc upon the village of Salem in 1692 by spreading lies and taking advantage of the mob mentality and instability simmering under the surface of the townspeople’s psyches.

Miller’s famous play underscores how mob mentality is an ugly part of human nature. First performed in the 1950s, it is an implicit criticism of the Red Scare led by Senator Joseph McCarthy and the French Revolution. Mob mentality is also a major theme in books like “Lord of the Flies” and “Animal Farm.” “The Crucible” will run on various dates from Nov. 12 to 19 at the McAfee Center.

“The Crucible” shows how fear mongering can lead groups in the wrong direction. The play marks a departure from previous, lighthearted productions like last year’s production of Shakespeare’s “A Midsummer Night’s Dream,” a comedy about fairies playing tricks on four lovers in the forests of Athens and six actors rehearsing a play before a wedding.

“We’ve done a lot of comedies in the past. We haven’t done a lot of tragedies and ‘The Crucible’ is definitely a tragedy,” Smith said. “So there’s a lot more intense emotions and a darker feel than past shows, which is really exciting.”

Drama teacher Ben Brotzman said he generally stays away from plays with a “deep, harsh” message like the “The Crucible,” but he believes the message is an important one to cover.

“My seniors in drama have been around for so long, and a lot of them feel that this play is social justice and conveys the importance of being unique, true to themselves and good people of the community,” Brotzman said.

To him, the ability to think for themselves is very important for the seniors, as they will be heading to college soon and bombarded with a range of different opinions and worldviews. He hopes the play will be a lesson on the importance of not blindly following the crowd and staying true to what they think is right.

This year’s play will be challenging for the veteran actors because it is so different from what they are used to performing, but Brotzman is confident in his actors.

“The audience is going to be intrigued by the depth and the acting abilities [of the cast],” Brotzman said. They’re going to see some really strong performances that I already saw in auditions.”

In picking a cast, Brotzman explained that he chooses people based on how well they work with other cast members, rather than raw talent. He believes putting the most talented actors in leading roles by default makes no sense; instead, actors perform best in the roles they fit well into.

The cast was decided by Brotzman with the assistance of his two stage managers and production manager, junior Arushi Maheshwar, who has been working in drama leadership roles typically reserved for upperclassmen since her freshman year.

As the production manager, Maheshwar is aiming to alleviate some of Brotzman’s burden by managing the student designers who handle sound, lighting, costume, props, backdrops and many other technical factors that go into a play.

“If every student designer came to Brotzman with a question about design all the time, it’d be overwhelming for him. I’m trying to answer those questions myself and oversee the tech crew, because he had to do a lot of that last year,” she said.

Other than assisting Brotzman with overseeing all of the students behind the scenes, Maheshwar also gives input on who she believes fits best for certain roles.

“I always look for respect. When you’re going outside [the theater], are these actors supporting other actors? You want to see that the actor is not just thinking of themselves, but also thinking of everyone else and acting very selflessly,” she said.

Additionally, Maheshwar likes to cast actors into roles that reflect their personality.

“It’s sad when people try to act like another person instead of acting like themselves or putting in their own unique element [to the role], so I look for big character choices that also reflect the person individually,” she said.

As for cast members, the drama program is no longer dealing with last year’s enrollment slump. Brotzman said he is “happily surprised” at the increase in students enrolling in the design and management team; the number rose from three last year to seven this year. The number of actors and the backstage crew remained the same as last year: 25 and 10 respectively. Drama is currently utilizing a Cast All program model, in which they find a role for every student who auditions.

“We worked very hard to raise awareness about our program and get it back to the place it was in previous years. But people are starting to come back again,” Smith said. “COVID was really rough. So now that we’re a couple years out of it, it’s really exciting.”