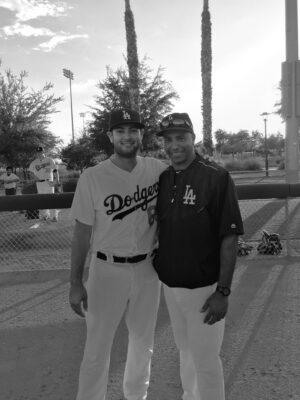 All 8-year-old Steve Berman wanted to do was be like his brother. When his older brother, Andy, started playing baseball, he knew this was the sport he wanted to play. Now, a  decade later, Berman is playing  minor league baseball for the Great Lake Loons of the Los Angeles Dodgers farm system, one of the few SHS players to ever to play professionally.

Before graduating from SHS in 2013, Berman played catcher, pitcher and shortstop for the Falcons. He received numerous awards, including Athlete of the Year, League MVP,  Second Team All-State and All-Mercury News honors in baseball.

After graduating, he went to Santa Clara University, where he starred as a catcher for three years, and was then drafted in the 31st round by the Dodgers in 2016.

Berman is now toiling in the lower levels of professional baseball, taking long bus rides and playing catcher for a Class A team. In his short career, he is batting. 230 to go with 34 RBIs in 306 at-bats.

Having been drafted in a late round, he is a long shot to ever play on field like Dodger Stadium or AT&T Park.

And Berman said he has found that the transition from  college to professional baseball to be a difficult step.

“The talent level is really high in professional baseball,” Berman said. “You play around 140 games in 160 days, so there isn't a lot of time off. You always need to bounce back and play your best every day.”

Furthermore, Berman said he travels a lot, often missing the ability to see his family. Although his family members are allowed to visit him, he cannot go home until the 4-month offseason.

“It gets pretty hard, especially if you are going through a tough time,” Berman said. “It was always easy back in high school to just go to my family, but professional baseball is a little different in that aspect.”

Berman said climbing the ranks of the minor leagues is an extended process.

Regardless of how far he climbs, Berman enjoys the sport and wouldn’t want to give it up for anything.

“I think one of the biggest things I like about professional baseball is that you get to play baseball every day,” Berman said. “Baseball has been my dream ever since I was a young kid, so being able to do that for a living is definitely pretty cool.”