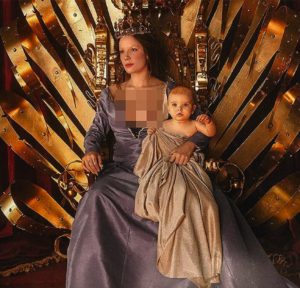 Photo by metro.co.uk
Halsey’s album cover for “If I Can't Have Love, I Want Power”

Permalink
Although Halsey’s new album is receiving mixed reviews, it is definitely worth listening to.

Grammy-winning artist Halsey released her fourth album “If I Can’t Have Love, I Want Power” on Aug. 27. These 13-tracks, some of which were recorded during the singer’s recent pregnancy, received both positive and negative reviews due to her transition to a unique rock vibe. It was a contrast to her usual pop style, leading to mixed opinions.

Since her last album “Manic,” Halsey has been releasing songs that feature complex lyrics covering controversial topics, such as bipolar disorder and drug addiction. “If I Can’t Have Love, I Want Power” is also a hard-hitting album focused around the central theme of womanhood and childbirth.

“The idea that me as a sexual being and my body as a vessel and gift to my child are two concepts that can co-exist peacefully and powerfully,” Halsey said in an Instagram caption for a post featuring her cover album. “My body has belonged to the world in many different ways the past few years, and this image is my means of reclaiming my autonomy and establishing my pride and strength as a life force for my human being.”

When I first listened to this album, I had mixed reactions. As a huge fan of Halsey’s first two pop albums, “BADLANDS” and “hopeless fountain mountain,” I was a bit disappointed that she chose a bigger rock presence in this album; I preferred the lyrics-focused songs and, as a pianist myself, I appreciated the ability to easily transcribe the pitches to play.

Despite my initial apprehension, I realized that Halsey was still, if not better, able to communicate her feelings through her rhythmic and pitch-based musicality. For example, the piano background in her song “Whisper” changes from innocent and quiet to mechanical and loud, as her lyrics shift from “you tell yourself you’re fine” to  “I’ve got a monster inside me.”

Many of the songs ended up growing on me — my fellow Falcon staff members have memorized the songs from this album that I’ve blasted so loudly that they can hear it from my headphones.

My favorite song from the album is “Girl is a Gun.” Although it is the shortest song in the album, its catchy beat and empowering lyrics quickly led this song to rise to the top of my list. Closely following are the songs “1121,” “honey,” “I am not a woman, I’m a god” and “The Lighthouse.” With the exception of “honey,” which is rock-and-roll based with a fast tempo and higher pitch, the other songs were similar to her usual pop-based lyrically-motivated style.

“1121” was a personal song for Halsey because it was named for the day she discovered her pregnancy. After reading about her journey to motherhood, through her past miscarriage and endometriosis diagnosis, I was glad to see that she was able to overcome these obstacles and finally accomplish her dream of becoming a mother.

“Ya’aburnee” was also related to Halsey’s journey to motherhood with a darker focus — her miscarriage in 2016. The song explicates vividly how even as a mother, her loss of the baby still haunts her through raw lyrics and minor keys.

“I am not a woman, I’m a god” touched upon Halsey’s bipolar disorder. The juxtaposition in the lyrics, “I’m not a martyr, I’m a problem” and “I’m not a legend, I’m a fraud” signify her contrasting feelings as a patient of bipolar disorder and illustrate her conflicting personalities through this comparison.

Although I liked most of the other tracks, I had two that I ended up disliking. The first song was “Bells in Santa Fe.” It is slow and has a somewhat ominous tone that didn’t sit right with me. Even though I tried to listen to it with an open mind, each time I gave it another chance, I ended up pressing skip.

The other song I didn’t particularly enjoy was “Easier than Lying.” The constant loud background music that often overpowered Halsey’s voice quickly became annoying, as it took me a lot of effort to figure out what she was singing.

In the end, though, I was surprised to find I liked the album a lot more than I thought I would. The unique musicality that Halsey delves into as well as the empowering and meaningful lyrics about childbirth and motherhood made this album an impactful listen.

Halsey’s message and musicality throughout the album sheds light on how singers can convey difficult topics through their music. Halsey effectively uses her widespread platform to deliver such empowering messages worth listening to.