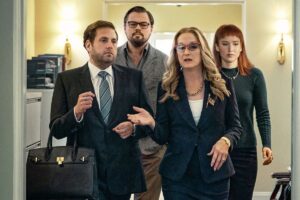 Permalink
Despite mixed reviews, the film’s satire and blatant criticism successfully achieves its purpose of criticizing the government’s inadequate response toward climate change, and the power tech monopolies have over every aspect of our lives.

As a meteor quickly moves on a collision course toward Earth, two lone figures struggle to convince humanity of the disaster it would cause: the destruction of all life on Earth. The government ignores the repeated warnings and pleas, opting instead to try to profit off of the rich deposits discovered within the meteor’s surface. With such apathy, would the human race make it out alive?

This ominous question is the basis for “Don’t Look Up,” a two and a half hour long movie starring Jennifer Lawrence as Ph.D. student Kate Dibiasky and Leonardo DiCaprio as Michigan State University astronomy professor Dr. Randall Mindy. The pair discovers a comet bound toward Earth after Dibiasky spots it in a routine telescope survey and Randall calculates its trajectory.

“Don’t Look Up” harnesses the persuasive power of satire in order to provide a political commentary regarding the Trump administration’s reluctance to respond effectively to global warming, the COVID-19 pandemic and the prevalence of fake news.

There are multiple connections between this fictitious world and our current reality. One of the most memorable and somewhat shocking aspects of the movie is its uncanny resemblance to current sentiments surrounding climate change. Director Adam McKay intended the comet to represent the climate crisis, though climate change isn’t explicitly mentioned in the film.

Although many critics felt the satire undermined those who are actively combating climate change, the film fulfills its intended purpose by bringing about a new perspective for those who don’t believe in climate change in a digestible format. By paralleling the incoming meteorite to the incoming effects of global warming, the movie pushes people to see the crisis as a real and current problem.

In May of 2020, Trump said “Coronavirus numbers are looking much better, going down almost everywhere,” when infections were skyrocketing.

Similarly, President Orlean downplays the risk of the comet on human civilization.

For instance, when told that the comet had a 99.78% chance of hitting the Earth, President Orlean replied, “Call it 70 percent, and let’s move on.”

Lastly, the film highlights the problems with the current divisiveness in the country’s politics, particularly through the “Don’t Look Up” motto. The nation is split into two factions after receiving knowledge on the incoming meteorite: “Look up” and face the meteorite, or “Don’t look up” and deny its existence.

Even more striking is how the movie incorporates a famous actor dubbed Devin Peters, played by Chris Evans, adorning a pin that had both an up arrow and down arrow. When he was interviewed by the press for his new movie, he claimed to be an advocate for both looking up and down in order to encourage “peace” within the nation. However, by doing so, he blatantly ignored the purpose of the “look up” movement in the first place: to warn people of the incoming meteorite. Such attempts to be politically correct at the expense of reality is a similar tactic used by many politicians and celebrities today.

The flaws of capitalism, particularly with the giant private tech companies’ power over the president, is also a common motif of the movie. One monopolistic tech company, BASH, is uncannily similar to a combination of Silicon Valley tech giants such as FaceBook, Apple, Amazon and Tesla in its influence over the federal government and the general population, effectively criticizing the power tech companies have over modern society.

Ultimately, the movie constructively provides commentary on current pressing issues with impeccable satirical acting that makes viewers both laugh and grimace in frustration. With climate change, the politicization of vaccines, the rising power of private tech giants and growing political divides, the film provides a refreshing take on the power imbalances in today’s world.