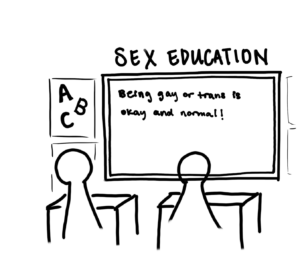 Dubbed the “Don’t Say Gay” bill by opponents, the legislation is part of a much larger attack on LGBTQ+ rights that has resurfaced in recent months in some conservative-leaning state.

The bill would additionally allow parents to sue educators or schools that teach said prohibited topics. Particularly concerning is the way the ban is worded: It restricts teaching content that is not “age appropriate” or “developmentally appropriate” for students.

These bills are rooted in the idea that teaching adolescents and younger students about gender identity and sexual orientation will encourage sexual activity. In reality, elementary and middle school sex ed courses rarely teach anything beyond positive biological and gender self-image, consideration of and options for safe sexual practice and respectful treatments of peers.

There is no scientific evidence or basis for the assertion that teaching children basic sex and gender knowledge leads to anything harmful. While conservatives have long advocated for sex education to be taught at home rather than in schools, it is impossible to ensure all students receive education that covers understanding of abuse and healthy sexual conduct without mandating it in the classroom, a lack of which may leave children vulnerable to sexual harrassment and violence. The lack of factual basis behind this anti-LGBTQ+ education movement makes its aggressive push to “empower parents” and “improv[e] quality of life for the state’s children,” as reported by NBC, all the more concerning.

While it is important to set reasonable and definitive guidelines for sexual education at various age levels, there should be a middle ground of teaching essential knowledge regarding sex and gender. These guidelines should first and foremost be set by educators, not politicians.

The fact that this bill and its related controversy are being weaponized as a talking point by conservative figures is a sure-fire signal that it doesn’t stem from any real concern for children affected by harmful sex-ed. Rather, it’s a campaign to demonize the LGBTQ+ community and its generally more communicative perception of sex — a moral qualm fighting against supposed degeneracy rather than ill education. The distinction lies in that considering sex, which LGBTQ+ individuals are forced to do by nature of societal norms, is not the same thing as encouraging it.

The fact still stands that for LGBTQ+ youth, education about gender and sex is vital, not political. This misunderstanding underscores the issue: Education about sexual or gender identity is not degeneracy, nor can identity be changed through “education.” No amount of censorship or lack of guidance substantially changes identity, though it can definitely have a detrimental effect.

For example, studies have shown that suicide risks for transgender youth are abnormally high — a stastic often cited to invalidate gender transition. Context shows, though, that this pattern is intimately linked with codified discrimination. A 2019 study by the Williams Institute at UCLA found that experiences of discrimination, stigma, family rejection and lack of access to gender-affirming health care had severe implications in wellness and suicidal ideation.

While the inclusion and legitimization of LGBTQ+ identities in general school-administered sex education does not guarantee an immediate culture shift or even a decrease in maltreatment, it is a way for young LGBTQ+ youth to at least feel seen and acknowledged as they are forced to traverse a complex ideological landscape just to live as themselves.

As these campaigns become more and more prevalent, we must be able to recognize the disinformation that gives it its power in the first place. School-taught sex ed, with its lack of standardization and often-awkward endeavors, is too often far from perfect. But as institutions for social and moral development as well as academic learning, schools — and sex education — have the unique power to validate LGBTQ+ identities in a political climate that is trying relentlessly to dismiss them.