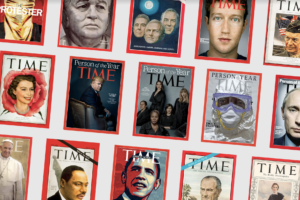 If you ask someone what they think of 2020, there’s a very high chance it’s not going to be good. There’s also a high chance that person will mention the pandemic, racial justice movement, California wildfires or election fraud conspiracy.

If 2020 was characterized by so many chaotic and often horrible events, the most news-making person of the year should probably reflect that. Time Magazine seems to think otherwise.

After Biden and Harris were selected, there was a social media uproar. Although some defended the decision, others argued that healthcare workers or leaders of the Black Lives Matter movement deserved it. But most of these people forgot about the purpose of the Person of the Year distinguishment.

The Person of the Year is not an award or achievement; it’s a recognition of the person who, according to the TIME website, “most affected the news and our lives, for good or ill, and embodied what was important about the year.”

Other winners include Franklin D. Roosevelt, Mahatma Gandhi and Albert Einstein, but they also include villains like Adolf Hitler, Joseph Stalin and Ayatollah Khomeini. This is because newsmakers can be good or bad.

Health care workers saved countless lives, BLM spread racial injustice awareness to millions and president-elect Biden defeated one of the most divisive and dangerous presidents in history. Still, none of those people or groups had as much impact as Trump; regardless of how you regard Trump’s impact, it was the most of any person or group.

Think about the pandemic. Doctors and nurses toiled in ICUs, but President Trump’s comments about the virus disappearing soon, injecting bleach into bodies to kill it and bashing lockdowns and mask-wearing graced headlines for months. Trump and his Republican allies also became the subject of many news stories for their stimulus negotiations and unwillingness to approve an expensive bill.

Think about the Black Lives Matter movement. Although the movement spread racial awareness to millions, Trump opposed supporters, gave a platform to the Antifa conspiracy and refused to condemn white supremacists. His stance on the movement generated as much news as the movement itself.

Think about the election. Joe Biden and Kamala Harris won a record-breaking race. But Trump is the one who claimed the election was fraudulent, repeated baseless claims during debates and held massive rallies during a pandemic. Trump was also the subject of an impeachment scandal (remember that back in January and February?). Even though Biden and Harris made headlines throughout their campaign, Trump did as well, if not more.

Lastly, think about international issues. 2020 began with Trump ordering the drone strike on Qasem Soleimani, an Iranian military officer, prompting the press to theorize about a potential World War III. Trump negotiated treaties between Israel and multiple Arab nations, a first in Middle Eastern politics. And the outgoing president’s actions echoed around all corners of the globe after he withdrew from the World Health Organization and signed a peace agreement with the Taliban.

TIME Magazine has a history of naming every president-elect as their Person of the Year. But becoming a president doesn’t equate to being the most influential. Rather, TIME needs to name the most impactful and newsworthy individual as Person of the Year. And in 2020, that person, like it or not, was President Donald J. Trump.