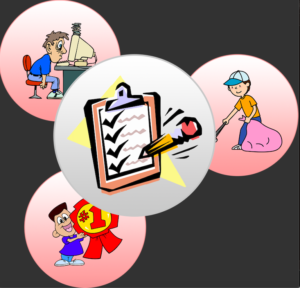 College applications include almost all of a student’s accomplishments and activities.

A year back, I asked a friend if he was willing to volunteer for a local senior program I co-ran for LGS Recreation. I told him the basics of the program, what he would have to do and that his volunteer hours would be certified.

In the middle of our conversation, he asked me, “You’re doing this for the apps, aren’t you?”

By apps, he was referring to the notoriously competitive college applications that engulf over nearly every Saratoga High student’s consciousness. Every accolade a student receives, or goal they achieve, ends up on this sheet of paper. As a result, whenever a student does something charitable or impressive, another will be quick to point out that their intentions may be for college.

But that shouldn’t matter.

Ulterior motives influence many decisions, not just a student’s, and they don’t make the decision any worse or better than it was before. Unharmful ulterior motives are no reason to punish a student for attempting to secure a better home for the next four years of their life.

A good deed with ulterior motives is still a good deed as long as it doesn’t cause harm, and students shouldn’t be unfairly questioned for their motives when doing something beneficial.

College applications, just like much of adult life, are a tough process and overtly demanding. They require students to go above and beyond to prove that they deserve a chance at higher education. That often includes doing extracurricular activities that a student wouldn't have otherwise done. The desire to get into a top-level college is an ulterior motive, but that doesn’t make the résumé’s activities unworthy.

Common culture has adopted the false belief that ulterior motives are evil. In fact, the two have nothing to do with each other. When students do something for their college application, it doesn’t mean that they are going through the motions with the activity; what it means is that the student is doing more than just the activity by also improving their college application.

Here’s an example of ulterior motives in a day-to-day setting: Stevie is an assistant manager at her work, and she makes enough money to live comfortably. Stevie doesn’t love or hate her job, but she’s satisfied. When her boss quits, Stevie is offered a pay raise to assume the position. Naturally, she accepts the offer. Stevie accepted the offer because she wants the money, not because she loves her job. Regardless, Stevie will likely excel at her new job, while also bringing home some more dough.

In fact, if Stevie had decided to not accept the job offer, it may have gone to someone whom the boss deemed less competent; her taking the job still benefited the company overall. Likewise, students’ leadership, volunteering and advocacy help their community in a variety of ways — even if they have the side benefit of bolstering college apps — and without students’ efforts, the community would be worse off.

I didn’t start my program at the senior center for college. It took a significant amount of work, but I found my time with the seniors of my community to be the most wholesome hours I spent every month. The program also had no overlap with what I wish to study in college, so it likely wouldn’t help my application.

My partner, on the other hand, signed on to boost her community service activities, and her impact was just as significant as mine. We both worked hard, helped countless seniors and left a positive effect on our community. There was virtually no difference between my actions and hers.

This isn’t to say that ulterior motives can’t sometimes be evil. But the what-ifs for any situation are infinite and don’t constitute a reasonable defense for critics of student conduct.

Most students’ ulterior motives are not harmful and don’t deserve to be frowned upon. This is especially true because other groups are publicly lauded for similar acts.

When public personalities voice their support for movements on social media, fans show their appreciation and repost it everywhere. While this benefits the movement, it’s also a PR move that benefits the star’s public image.

Large corporations like Apple, Disney, Patagonia and others also benefit from the free press associated with their charity.

Teens should be no exception. They still deserve appreciation for their efforts even if they’re tinged with self-interest.

So the next time a student starts an organization, volunteers for a local charity or promotes a movement, just appreciate what they are doing. You don’t need to cheer them on like a fanboy, but at the very least, do not question their motives.

A good deed, whatever the unharmful motivation, is still a good deed.