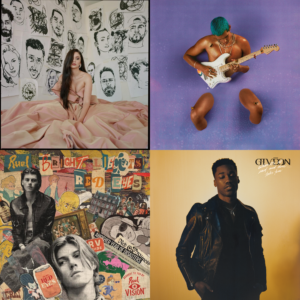 In place of seeking out lesser-known concerts and music festivals, music fans have spent their time digging through the depths of streaming platforms such as Spotify and Apple Music to uncover unique and often underrated artists. In a year of isolation, established musicians have also come together to feature newer artists.

As such, a plethora of emerging pop R&B artists have taken this fairly niche genre into the spotlight with their dark, ambient instrumentals and layers of smooth vocals and harmonies. Still, there is much more to come from these rising stars, as they have only scraped the surface of their musical potential.

The best example is the Miami-native songwriter, Sabrina Claudio. She has racked up tens of millions of streams on Spotify, with her most streamed song being “Belong to You,” a collaboration with singer and rapper 6LACK.

Claudio’s unique sound lies in her soft and alluring vocal delivery and lyrics. Her instrumentals utilize different kinds of reversed instruments and dark guitar melodies, which are highlighted in her single “Rumors” with singer ZAYN. Both singers’ voices compliment each other flawlessly, creating a harmonious sound while riding the snare pattern and layers of pads and soft synthesizers that fill out the space.

Claudio’s best performance thus far is her emotional masterpiece “Truth Is,” where she dissects her thoughts on getting over love of a past relationship. This piece features one of her most angelic vocal deliveries. In the final chorus, a combination of harmonies, orchestral strings, guitars and pianos create a surreal listening experience for all audiences. Not to mention, her lyrics bring listeners to the verge of tears, revealing her vulnerability and emotions.

In an interview with Genius, Claudio mentioned that “[This] song is about emotions we often think of but are afraid to voice — the feelings we try to convince ourselves we don’t actually feel.”

Along with Claudio is Mexican-American artist Omar Apollo, whose upbeat tones contrast those of Claudio. With simpler and more defined instrumentation consisting of mainly drums, bass and guitar, Apollo creates a funky vibe in his music.

His recent collaboration with Australian artist Ruel, “Want U Around,” garnered attention from old and new fans. The mid-tempo triplet beat brings movement to the ocean of harmonies throughout the song. The panning of vocals from one ear to the other is ear candy for listeners to enjoy.

Many of his past works have received recent recognition as well, with his singles “Trouble” and “Hearing Your Voice” off of his 2019 album “Friends,” gaining traction. His most streamed songs up to date, “Ugotme” and “Erase,” are similar in style — funky melodies that play off the bounciness of the baselines and drums.

He hasn’t strayed from his Mexican roots either; fans have seen several similar-styled Spanish songs scattered throughout his albums, and he has vowed to continue exploring both cultures in his music.

Apollo’s musical acquaintance, Ruel, came from a different path, however. Ruel broke through with blockbuster singles such as “Painkiller” and “Dazed & Confused,” both of which have over a hundred million streams on Spotify.

His sound continues to mature over time. Unlike Apollo or Claudio, Ruel’s voice is more gravelly but provides a soulful edge to his music. As such, many of his instrumentals involve vocal samples, pitch-shifted and distorted, to sound like their own instruments.

Ruel’s recent EP, a collection of songs shorter than an album, “Bright Lights, Red Eyes” shows glimpses of a different direction for the Australian singer. He replaces many of the past catchy beats and performances for a more soothing experience. In his single with songwriter Cautious Clay, “say it over,” Ruel’s heartfelt voice meshes perfectly with Cautious Clay’s deep and lush delivery.

As Ruel sharpens his musical ability, he is slowly finding his feet in the industry and discovering his unique sound. His new single “too many feelings” may just be a teaser for what fans can expect of him in the near future.

Most notably, R&B artist Giveon has seen a meteoric rise to stardom. His first large exposure began with a feature on Drake’s “Chicago Freestyle,” and his album “Take Time” has seen singles such as “Heartbreak Anniversary” and “Like I Want You” soar on Billboard’s charts.

Giveon’s main selling point is his especially deep voice and his exceptional vocal range that stands out from the common theme of instrumentals among R&B artists.

Recently, Justin Bieber featured Giveon on his single “Peaches” that peaked at the No. 1 on the Billboard Hot 100 chart, which is just a glimpse at what Giveon has in store for future projects.

With the rise of talented artists such as Claudio, Apollo, Ruel, and Giveon, the future is bright for the pop R&B scene. As concerts and tours reopen, it is no wonder that these artists are ready to shine on the world’s biggest stages.