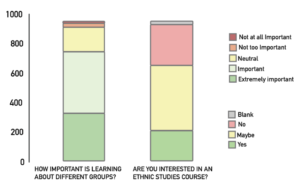 Results from last semester’s diversity survey show that the majority of students think the school can do a better job with incorporating the history and lives of racial minorities within curriculums.

Last semester, a survey students took about ethnic representation within the school curriculum revealed that more than half of the student population thought that all classes needed more cultural perspectives, especially regarding African Americans, Native Americans and East Asian Americans.

According to assistant principal Kerry Mohnike, the survey was created by the Curriculum Review Advisory Committee to better understand students’ perspectives about representation in different course curriculums.

“Teachers want to teach the fundamentals, but they also want as many perspectives or viewpoints represented as possible,” Mohnike said.

Nine hundred forty eight students — 73 percent of the student body — took the survey, with 268 seniors, 280 juniors, 206 sophomores and 192 freshmen. Of those who replied, 628 reported themselves as Asian, 221 as white, 33 as Hispanic, four as African American, four as Filipino, three as American Indian or Alaskan and three as Pacific Islander. Fifty two declined to state their ethnicity.

The survey polled information regarding Native American, African American and East Asian American representation in history, math, science, English, social studies and electives courses. Although 78 percent of students stated that it was important to learn about different groups within their classes, only 22 percent expressed interest in taking an ethnic studies course.

The results of the survey showed that overall, among all racial minorities, African Americans had the most representation across all classes, but 57 percent of students still say the school could do a better job teaching about their culture. For Native Americans and East Asian Americans, on the other hand, two thirds of students said that there was not enough representation.

Both STEM and electives classes had lower percentages for all three groups in general. Math and science classes hovered around 20 percent of students reporting enough representation for all three groups, with the highest being East Asian Americans at about 24 percent. Electives had higher results, with 24 percent, 28 percent and 34 percent of students reporting enough representation with Native Americans, African Americans and East Asian Americans, respectively.

The information from the survey will later be used to revise the curriculum if needed to include more perspectives from different ethnic groups. According to Mohnike, staff from each department will utilize the results of the survey to make changes, if deemed necessary, but currently, it is too early in the process to consider anything specific. The committee will participate in several trainings later in the spring and during the summer that will entail work regarding these changes.

The survey has elicited mixed opinions from students. Some students believe that although some classes are in need of a change, for others, it is unnecessary.

“I personally believe the curriculum for math/science classes doesn’t need to be changed due to the fact that the curriculum itself does not focus nor incorporate any cultural perspectives,” junior Amitav Rawat said.

Rawat, however, said history and English do need to have their curriculums tweaked to have a more even balance of cultures, as they primarily focus on the American culture. He suggested having every book in English classes focus on a different culture to expose students to more diversity.

Others like junior Glenn Liang, said all classes still need to have more representation, regardless of the subject.

“Almost all classes should have their curriculums changed somewhat to include more perspectives from different groups,” Liang said. “Even if it was something STEM-related, it would be interesting to learn about how these groups have influenced those fields.”

Although many of these plans are still in the works, students have hopes for how classes may change based on the results of the survey.

“It doesn’t hurt to learn about these new things,” Liang said. “In fact, I think it would make some classes a lot more engaging and compelling if we learned it from all sides of the story.”