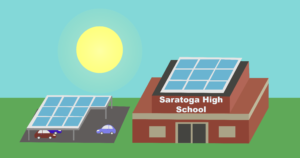 Permalink
Board of Trustees has come up with four viable options for solar panel installation.

For years, community members and students such as junior Miranda Yee have argued that since many neighboring schools like Prospect, Wilcox and Monta Vista have installed solar panels, so should the wealthier Los Gatos-Saratoga High School District.

“As a voice representing my fellow students, I want to remind you that [global warming] isn’t just an issue that can be pushed aside for another day,” Yee said at a Los Gatos-Saratoga Union High School District board meeting on May 10. “We are fortunate enough to live in the global center for technology, among the wealthiest cities in the nation, and we should take advantage of the opportunities we have. It’s time to start talking about solar and time to act.”

Installing solar panels was already a long-term objective of the district’s 2015 Measure E bond; however, school site councils had prioritized other projects such as constructing new or remodeling and replacing existing worn-out buildings and systems, so the solar project did not rise as a serious topic of discussion until late 2021.

Due to this increased community push, the district plans to discuss a plan in mid-June that could potentially result in construction of solar panel farms at Saratoga High School, Los Gatos High School and possibly the district office before the end of 2022 if approved.

Two members of the board worked with district superintendent Michael Grove on a feasibility study on the installation of solar panels. The study will be presented at a workshop in mid-June which will be scheduled for sometime during the week of June 20, though the exact date has not been confirmed. Direction to move ahead with solar will be given at the workshop if a majority of the board (three of five) are in support of moving forward with it.

The board will consider four options for solar panel installation, all of which have been chosen by some school districts in Northern California.

The first plan is Do It Yourself (DIY), where the district would finance and build solar panel farms with funds from the Measure E bond, or a potential 2025 bond.

The second option is a Power Purchase Agreement (PPA) — an arrangement in which a solar company outsources logistics concerning the solar panels in exchange for a party’s 15-to-20-year contract to purchase electricity using panels installed on the site from said company — from a Joint Powers Agency (JPA), a more cost-effective route than the DIY.

The third option is to obtain a PPA from a party other than a JPA prided contractor, where the district would contract its own Green PPA provider. Large capacity storage batteries are an additional option to consider for supplying electricity when the sun is not out.

The board members who worked on the plan currently favor  the third option of having a PPA from a party other than a JPA prided contractor. This option boasted benefits of having all the advantages of installing solar panels on-site along with the lowest cost of electricity. Status updates regarding the process will be delivered at board meetings in the near future.

Students advocate for solar at May 10 board meeting

Yee, who plans to major in environmental science, spent three hours writing and practicing her speech regarding solar panels, which she delivered during the board meeting’s public comment section. She said she was “really nervous” to give the speech as she had little experience with public speaking.

“I’m interested in environmental activism,” Yee said. “I haven’t done stuff like that before; it was a bit outside of my comfort zone, but I’m really glad I did it.”

Aside from Yee, sophomores Elena Burgos, Meher Haider and Anna Meier also gave speeches on solar panels at the Board meeting, and others joined the meeting in support. Despite not having coordinated with the other speakers prior to the meeting, Yee said it was “fun that we created a little army and had an audience.”

The common thread between all the speakers was that they were all Media Arts Program (MAP) students in history teacher Mike Davey’s classes.

Sophomores in his class had done a “Be The Change” project near the end of the year. After a year of learning “miserable things in history” such as genocide, wars and environmental destruction, students were tasked to create documentaries on current issues — whether local to Saratoga or worldwide — to alert people and instigate change. Davey said one group focused on solar energy, which he thinks explains why a number of sophomores showed up to the board meeting.

Both MAP 10 and 11 also participate in daily current event discussions, so students are informed about the destruction of the environment and what they can do locally along with people in history that have made a difference.

Davey said he was “really proud of [students]” for taking action as opposed to being bystanders.

“It’s not easy as a student, a 15 or 16 year old, to go speak to elected officials and tell the officials what they think and tell them they’re disappointed,” Davey said.

The day after the meeting, Yee sent an email with her speech attached to the board once again urging them to take action through installing solar panels. The board responded with a lengthy, detailed explanation of their plans for solar. Yee said she is “glad the board seems to be making an effort.”

Recently, Davey has been “really disappointed with the school board for not putting students, teachers and the environment first” and instead “deciding to increase reserves for some mythical rainy day in the future.” He said even the pandemic “wasn’t a rainy day” as the district received more money from the state. He believes the school should be spending money on current issues rather than putting it in reserves.

Following these frustrations, he was encouraged after hearing of the board’s plan to install solar panels.

“We’ve dragged our feet on this for too long, so I was hopeful for a change,” Davey said. “The school board is finally doing something in this regard.”

Davey said student voices are powerful for enacting change, and encourages students to advocate for what they believe.

“It’s their schooling, their education, their future,” Davey said. “It’s already taking place, but by the time environmental degradation really transforms the country, I’ll be dead. But for 15-year-olds, it’s their future — their near future and long-term future. So I think it’s really important for them to say what they think is important.”