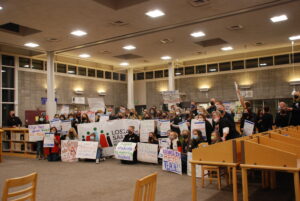 Photo by Selina Chen
Teachers gather for a picture in the library after the Nov. 16 LGSUHSD board meeting.

Just before the start of the Nov. 16 board meeting in the school library, more than 60 Saratoga High and Los Gatos teachers — all members of the District Teachers Association (DTA) — lined up outside while holding signs with messages like “Reserves don’t teach students, Teachers DO!!” and “This Is a School, Not a Savings Account.”

During public comments, 10 of the teachers told the five-member board that their paychecks aren’t keeping up with inflation.

The primary cause for this demonstration, teachers said, was the absence of significant wage increases in several years as the board has sought to put away more money in a reserve fund to be used in case of budget shortfalls.

By law, California public schools must keep a minimum of 3 percent in reserve. According to a report presented at a California Teacher Association meeting on Nov. 18, the district is keeping 15.75 percent in the reserve, or about $9 million.

This reserve means better protection against disasters in the long term, but it also means less money for employees in the short term, teachers say.

Currently, the yearly minimum salary for a new teacher with a bachelor’s degree is $67,755. When compared to some other local districts, salaries for teachers, which averages around $100,000, have fallen behind, now ranking 10th among districts in Santa Clara County.

According to guidance counselor Alinna Satake, teachers here are making $5,000 to $30,000 less a year compared to their counterparts in districts such as Mountain View-Los Altos, Palo Alto and Santa Clara.

With inflation running at 6.2% from last October to this October, the lack of corresponding wage raises is becoming increasingly concerning to teachers. Because the pay teachers receive here isn’t keeping up with rapidly increasing consumer prices, some are considering applying to higher-paying districts while candidates for open positions have sometimes taken jobs in higher-paying districts.

Teachers told the board about having to work extra jobs or rent out rooms in their houses.

“It’s sad to hear that someone who works here full time still has to put in 20 or 30 hours for an outside job or second job or a side hustle, just so that they can make ends meet,” Satake said.

Math teacher Seema Patel is one of several teachers on campus who has taken on a separate part-time job.

“I have two degrees and a full-time job, yet I need a part-time job to be able to stay in this area,” Patel said. “That should not be what I have to do. When you’re mentally and physically exhausted, how can you fully be there for your students?”

Math teacher Kristen Hamilton mentioned that the increasing demands placed on teachers within the past few years, especially during the pandemic, have not been compensated in terms of salary.

Teachers pointed out the district is consistently high-performing, being recently awarded the distinction of No. 1 district in the state by both Newsweek Magazine and Niche, but their salaries don’t reflect the work they are doing.

“We should be on par salary-wise, especially since there are other districts in our area who are paying those fair wages,” Hamilton said.

The DTA has also held two morning rallies, one on Oct. 29 and the other on Nov. 10, in which teachers grouped along Herriman Avenue. Before school started at 8:30 a.m., teachers lined up along Herriman Avenue, carrying signs to advocate for their cause. Hamilton showed a sign depicting the steep increase in cost of living and the flat increases in teacher salaries. In addition, teachers have organized certain days to wear all black as a way of directing attention to the issue.

The DTA is now in the process of negotiating with the district leaders using interest-based bargaining, a method favored by the district. A second negotiation meeting will be held on Nov. 23.

“In my 17 years at the district, we have never rallied in front of our schools and at the board meeting,” Patel said. “I am very proud that we have stood up for ourselves to demand what we have earned.”