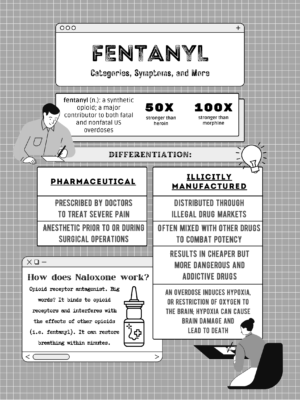 Photo by Leyna Chan
Fentanyl’s potency is well-known, but it’s important to differentiate between its medical and recreational roles.

Fentanyl overdoses and deaths are on the rise, and starting this fall, the district is trying to make sure both Saratoga and Los Gatos staff are ready to handle any possible episodes, including making sure each classroom now contains a Naloxone kit that aids in reviving victims.

According to data from the California Department of Public Health, the number of fentanyl overdose deaths in California jumped from 82 in 2012 to 5,722 in the past decade. The typical age range for victims is between 18 to 25 — ages where drug experimentation is common. The need for fentanyl awareness grew after the fentanyl-related deaths of two LGHS students in 2020.

Such incidents have only continued to become more prevalent in schools and neighborhoods across the Bay Area. Even over-the-counter drugs like Tylenol and Advil can be laced with fentanyl. In response to the risk of fentanyl overdoses, opioid overdose training has been implemented  in school districts statewide.

The opioid overdose training for SHS teachers began as an addition to the pre-existing standard staff protocol at a faculty meeting in September. The presentation covered matters such as how fentanyl attacks the body and medication administration, information that is often unfamiliar to those in relatively unafflicted communities like Saratoga.

Throughout the presentation, staff members learned about how each classroom has been pre-equipped with a Naloxone kit containing two nasal sprays, one for each nostril. In the case of an overdose, teachers are expected to quickly recognize and address symptoms, administer the medication (twice if needed) and contact both 911 and the school nurse.

Over the past couple of years, health clerk Tammy Parris said she has seen two accidental overdoses. In both circumstances, the students had taken medication for treating anxiety and trusted the safety of their source. In reality, the medication had come from a third party that had laced the pills with fentanyl, which entered their systems, gradually suppressed their ability to breathe and caused the students to suffocate. Fortunately, the responses were swift and the necessary Naloxone medication was administered in time to revive them.

During the presentation, experts provided insight on the transmissibility of the opioid in order to give teachers a better idea of the risk it poses to both students and staff alike.

“Fentanyl is very transmissible through your fingertips, especially since our hands are porous,” Parris said. “You can be contaminated without really even knowing that you’ve gotten it nor having taken the pill.”

English teacher Megan Laws said that she felt grateful she got to attend the presentation, as it shed light on an issue that she had not yet encountered before in the school environment.

“They were telling us three granules of fentanyl is enough to produce an overdose, and that’s like, grains of salt,” Laws said. “The presentation opened our eyes as to how much of a problem [opioid overdose] is in the Bay Area, even with populations that aren’t considered careless.”

Parris noted that the training was sufficiently effective, saying it was “the best the district could provide given the general lack of direct experience the school staff has had with these situations.” She said she trusts that any teachers unsure about possible symptoms will seek her or the district nurse for assistance.

Despite the training and preparation, there’s a possibility that symptoms may go undetected or be difficult to identify and confirm in a real event. To address this concern, the trainers informed staff that there is no harm in administering the medication even if their suspicions turn out to be wrong.

“The nice thing about that medication is if you administer it, and you don’t have a medication in your system that it needs to counteract, then it won’t hurt you,” Parris said. “It’s better to give the medication, especially if you’ve got someone who’s not responsive or breathing.”

So far little information about the epidemic has gone to SHS students, but a seminar on the topic was hosted at LGHS on Oct. 20.

“You can do a lot to your system if you’re experimenting,” Laws said. “I think that students should definitely be made aware of the consequences. Reading that fentanyl can produce an extreme euphoria, wanting to feel that and not knowing the downsides to it is a problem.”