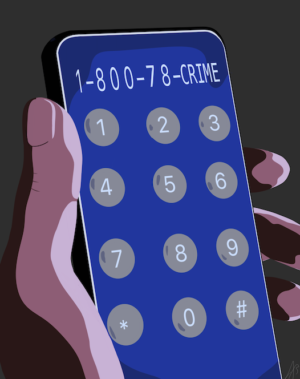 In an effort to combat discrimination, harassment and bullying and to foster a more inclusive school climate, the Los Gatos-Saratoga Union High School District (LGSUHSD) has introduced a 24/7 anonymous and confidential tips hotline.

Heath Rocha, the head of student services for the district who receives reports from the hotline, decided to implement the hotline in the district after seeing its success at the Carmel Union School District where he held the same position from 2010 to 2016.

The tips hotline is an asset to preventing behaviors that may result in a student’s inability to feel safe and comfortable at school.

This past summer, students at both Los Gatos and Saratoga High used social media to open up about their experiences of sexual assault that have occurred in recent years. Rocha mentioned that he had read a lot of these allegations and hopes the district can use this hotline to better address those situations in real time.

“What if there was someone who witnessed [an incident] and didn’t know who to tell or didn’t want to be labeled a ‘snitch’?” said Rocha. “Then, the administration can look into it instead of months or years down the road.”

Members of the Saratoga High and Los Gatos High community can report violent, criminal or questionable behavior simply by dialing 1-800-78-CRIME. So far, officials said the district has received one call on the hotline.

The new hotline is a method for the district to be “both proactive and assertive” in listening to the student voice and community input, assistant principal Kerry Mohnike said. The number is run by WeTip, a company currently operating multiple nationwide tip lines. Students may submit anonymous tips either over the phone or online via their website.

“The WeTip line may be a place where a student who feels like they don’t want to get involved but wants somebody to take care of a situation would call it in,” Mohnike said.

The hotline can be used to report sexual assault or harrassment, discrimination, bullying or any other forms of violent behavior that a student or community member has experienced or witnessed.

When calling over the phone, students will speak with a WeTip responder who composes a report and sends it to Rocha. The WeTip hotline is manned 24/7 for every week of the year, giving students an open resource regardless of school schedule.

Rocha is the primary contact for incidents during school hours, although the responder may additionally contact law enforcement depending on the urgency and timing of the situation at hand.

Calling the hotline may result in not only action from law enforcement, but also school-wide investigations, restorative justice actions or tabs kept on alleged perpetrators and victims. However, the anonymity of the caller is maintained throughout the entire process.

Rocha explained that though LGSUHSD is aiming to foster a safe, respectful and equitable school culture, an anonymous tips hotline is just the first step. Additional measures such as student and staff training and school climate initiatives will be introduced to the district.

Rocha said he urges students to utilize this hotline if they are confronted with an uncomfortable and potentially dangerous situation.

“If there’s any doubt, call,” Rocha said. “We will take them. I think even at a low level, it heightens the alert and notice, and allows people to focus on certain areas of campus, or certain students. For me, that can only lead to positive change.”