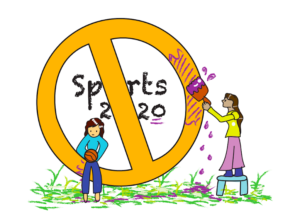 Athletes’ hopes for school sport seasons to finally restart in mid-December  were crushed when coaches announced that practices would be canceled for the rest of the year and may tentatively start in January following the recent surge of COVID-19 cases and Santa Clara County’s move back into the purple tier.

Governor Gavin Newsom has not released guidelines for conducting athletic activities, leaving many schools and athletes alike uncertain of what lies ahead. In a press release on Dec. 1, the state announced that the governor would delay the release of sports guidelines until January at the earliest.

These delays have come with a cost locally.

“The frustrating thing for us is we cannot redo a sports calendar until we know what the sports guidelines are,” said athletics director Tim Lugo. “It’s disappointing because the governor originally planned to release those guidelines after the 2020 election to prevent political interference. But now that the election is over, COVID-19 cases have exploded.”

All sports that were previously meeting in person, including water polo, football, boys and girls basketball, girls lacrosse, cheer, dance and softball, have now been barred from in-person practices.

Instead of the regular three seasons, the school had initially planned to have two seasons, with fall and some winter sports merged into Season 1 and the rest of the winter sports and spring sports merged into Season 2. There had been hope that season one would begin during December, but the original two-season calendar will likely be pushed back with the length of season one or both getting cut short.

Junior Chris Liu, who plays for the boys basketball team, doesn’t think it was too unexpected of a change.

“Initially, I was pretty disappointed, especially for our seniors, having their final year be postponed and possibly canceled is devastating,” Liu said. “However, considering our county’s recent shift into the purple tier, I am not surprised that sports are postponed.”

Especially problematic are high-risk, close-contact sports such as wrestling and football. So far, it appears as though the less-dangerous sports such as tennis will be played sooner than high-risk sports. Regulations regarding how to handle each sport depend upon the county’s color-coded tier.

The ever changing restrictions have not only been hard on student athletes, but on organizers and administrators as well.

“I can probably write an entire handbook on how to be an athletic director during a pandemic now,” Lugo said. “I think we should probably write one so we could at least give people advice, because there will be another pandemic in the future.”

At the moment, the school is hoping to keep Season 2 sports, which consists mostly of spring sports that were canceled last year, as whole as possible, but it is still too early to tell.

Lugo, however, is optimistic that a restart will happen with vaccines on the verge of being delivered to the highest risks groups.