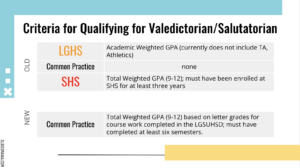 Last year, junior Mahati Kotamraju took AP Chemistry at Apex Learning Virtual High School. Because the course was taken outside of school, it was subject to a host of rules regarding its placement on official school transcripts and whether it could receive a weighted GPA boost.

With a new district initiative implemented by superintendent Mike Grove to increase consistencies between Saratoga and Los Gatos High, such rules have changed.

The district created work groups this fall to issue recommendations to the five-member school board on whether to increase consistencies within GPA calculation or leave current policies alone. The work groups were composed of two board members, Grove, district staff, and teachers, parents and students from both schools.

The Area 1 work group first met in fall 2020 and submitted its recommendations to the Board, which approved a host of changes in early 2021. The changes were announced during an August Zoom webinar by Saratoga High principal Greg Louie and Los Gatos High principal Kevin Buchanan.

The new policies are being implemented district-wide and only affect current freshman and future classes.

In terms of GPA calculation, no changes were made. The district-wide policy maintains that all classes are displayed on transcripts on a 0- to 4-point scale with no differences for plus or minus grades, and an extra grade point for honors and AP courses. In the case that the same class was taken outside the district and then taken again within the district, the latter replaces the previous grade on transcripts. This methodology of calculation is not aligned with the UC and CSU systems.

Most changes approved by the board are in regard to how classes taken outside of the district would be calculated, if at all, on official transcripts.

Under previous rules, classes taken in foreign countries — if a student moved from another country — were marked as such on SHS transcripts and offered up to one extra grade point for 9th grade and up to two for 10th grade.

Under new rules, all transfer students — both international and domestic — will be given honors and AP credit on SHS and LGHS transcripts for previous honors and College Board-approved AP coursework.

Junior Willie Kuiper is a transfer student from the Netherlands who came to Saratoga High this year. She said her parents had to fill out many forms for the school and that her teachers in the Netherlands had to write recommendation letters for placement in classes here. While the process was long, she said she understood that it was necessary.

“I guess I like the new policy, but I don’t really have an opinion on it,” Kuiper said. “I don’t care.”

Previously, the school did not offer extra grade points to outside AP, honors and community college courses for in-district students. Going forward, the school will add these courses — excluding English and history courses, as well as Earth Science and Biology — to student transcripts, as requested by students. Courses will be added only if they are required for graduation or UC/CSU eligibility, a combination of SHS and LGHS policy.

Under the updated rules, honors and AP credit will be awarded to in-district students taking such courses outside of school if the course is offered within the district at either school. Community college courses will remain unweighted at both schools.

“I wasn’t planning on and not many other freshmen are planning on taking classes outside of school,” freshman Shaan Janardhan said. “As a freshman, I couldn’t really care less.”

Aligning criteria for valedictorians and salutatorians

Saratoga High previously used students’ total weighted GPA — freshman to senior years — and required that students be enrolled at the school for at least three years.

The new practice — also starting with current freshman — will use total weighted GPA based only on coursework completed within the district, excludes outside and transferred coursework and requires that students be enrolled at either SHS or LGHS for at least six semesters, which do not have to be consecutive. If a student retakes a class, their previous grade will be replaced, which is different from the UC/CSU practice of averaging the grades.

“I think the changes make sense, but the grades at SHS are very different from LGHS,” Class of 2021 salutatorian Enoch Luk said. “Even within our school, there are classes with super different grading standards. Since there’s no plus and minus grading, the award goes to whoever takes the most honors classes.”