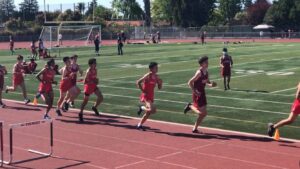 The distance team runs against Fremont High School in the May 5 meet.

Senior distance runner Niyanth Rao felt a surge of pride as he, senior Bryan Young and juniors Harrison Dance and Hershey Rao snatched the victory in the 4-by-400 meter relay in the first meet of the season against Mountain View on April 15.

“What was pretty cool was that this event usually involves a team of sprinters rather than distance runners, and all of us had run at least an 800 before so we were all pretty fatigued, but we came down with the win,” Rao said.

Despite a shortened unofficial season, a smaller roster and COVID-19 precautions, distance athletes have made progress in the season.

In a normal year, the track season would be spread over 13 weeks ending in mid-May with league finals and CCS, said head coach Archie Ljepava. This year, the season was scheduled to last only seven weeks and athletes had just one week of practice before their first meet. According to assistant coach Kathy Tippetts, as of May 20, 2021, while SCVAL and CCS have been approved, the CIF state championship meet has not. If any athletes qualify for CCS, the season will be extended by approximately two in a half weeks longer.

To ensure the safety of athletes and coaches, the team is abiding by guidelines from the California Department of Public Health (CDPH). Every weekday from 3:30-5:30 p.m., the track is closed to the public.

Typically, the distance team runs two to three hard workouts per week, with the rest being easy runs. Because the majority of the distance runners already ran together during the cross country season, they had a head start at the beginning of the season in comparison to other sports and track teams.

“Everyone started out close because we had been together for 10 weeks [before the track season started] during cross country,” Rao said. “On top of the experienced athletes, we also have some younger talent, so our team is pretty solid.”

As of May 20, the entire track team has run five meets: on April 15 against Mountain View, on April 29 against Santa Clara, on May 5 against Fremont, on May 13 against Wilcox and on May 20 against Monta Vista. Dance and Rao also ran two invitational meets at the Dublin distance festival on April 10 and April 17. Dance came in first place at the first meet and ran a 9:15 time for the 3200 meter during the second meet; his was one of the top times in the state. Rao obtained a personal record, running 4:47 for the 1600 meter at the second meet. Rao said the team hopes to have five to six people run under a 5-minute mile by the end of the season.

“As far as what I’m seeing, I think everyone on the distance team is in a really good position,” Rao said.

The main goal for the entire track team this year, as opposed to previous years, is for athletes to prepare for the next season due to the unprecedented circumstances.

As a result, sophomore Khan has observed that compared to last year, this year seems more sporadic and less organized. Besides that, he thinks the season has been running pretty smoothly.

As the season is coming to a close, coaches hope that the past few months allowed their athletes to continue to work hard, improve in their events and most importantly, have fun.

“Getting to meet new friends and see some people again that I kind of forgot existed is quite fun,”  Khan said. “It’s great that I got to know quite a few people better this season.”