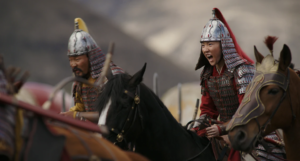 When theaters around the world closed in March due to COVID-19, people went to streaming services to find content. Platforms such as Netflix and Disney+ gained 10.1 million and 24.5 million subscribers, respectively. Titles like “Hamilton” and “The Lovebirds” moved to streaming and became worldwide hits.

Yet many studios chose to wait for theaters to reopen and kept their high-budget movies off streaming platforms. Disney and Warner Bros., for example, believed that digital sales could never match the revenue made at theaters.

That changed on Aug. 4, when Disney announced that “Mulan,” a new live action remake of the 1998 classic, would premiere exclusively on Disney+ to stream. The film, released on Sept. 4, costs a premium fee of $29.99 on top of the $6.99 per month Disney+ subscription. The success of the movie will indicate how much viewers are willing to spend on an at-home movie and whether high-profile debuts can equal traditional box-office revenues.

If “Mulan” succeeds, it could change the way movies are released. Future titles like “The Batman” and “Fast 9” may go directly to streaming services instead of playing in theaters first.

But let’s not get ahead of ourselves.

“Mulan” faces major roadblocks. For one thing, it costs $29.99 whereas most digital movies cost up to $19.99. With the exception of pay-per-view sporting events, no at-home entertainment has ever been so expensive.

My sense is that the $30 price point may seem high, but it is justified. The target audience of “Mulan” is families, who often buy four or more tickets at a theater. Four movie tickets cost an average of $36.64 in the U.S., according to the National Association of Theater Owners, and in a place like pricey Saratoga, four tickets can cost up to $80. For many who are interested in paying for “Mulan,” $30 is a bargain.

There is a legitimate argument to be made, however, that the price of “Mulan” is unreasonable and that it should reflect the lack of the theatrical experience.

Everyday homes have many distractions, such as talking and texting, that spoil the movie experience. Theaters provide a large screen, superior sound and a distraction-free environment that are rarely recreated at home. The pandemic may tell us how much consumers value this experience and whether they’re willing to pay theatrical prices without it.

Before COVID-19, “Mulan” was expected to generate comparable revenue to previous Disney remakes at the box office. These movies, such as “Beauty and the Beast” (2017) and “The Lion King” (2019), made $414.7 million and $580 million in profit, respectively.

To generate similar revenue on Disney+, “Mulan” would have to top the current digital sales record held by April’s “Trolls: World Tour,” which made about $100 million.

“Mulan” cost around $200 million to make and is expected to cost nearly $120 million to market. In order to recoup that money, the movie would need to earn $320 million or be bought by about 10.67 million households.

Millions of Disney fanatics, movie buffs and families searching for entertainment will likely come out in force to watch “Mulan,” and those movie sales can potentially recoup the budget of “Mulan” and then some.

“Mulan,” however, has little chance of making theater-level money. While Disney can potentially break even on the massive live-action remake, it will be almost impossible for the movie to make as much money as “Beauty and the Beast” or “The Lion King”; there simply won’t be enough interested consumers.

Given Disney’s concerns that “Mulan” would lose money in theaters, recouping the film’s budget would undoubtedly be a financial win. But this would make the release of “Mulan” more of a one-off and less of a blockbuster game-changer. Regardless, the film will have significant implications for the entertainment industry.

“Mulan” has the potential to change how people watch movies for years to come. Whether that happens comes down to the film’s success and, ultimately, how much money people are willing to spend to watch a movie on their family room TV screen.