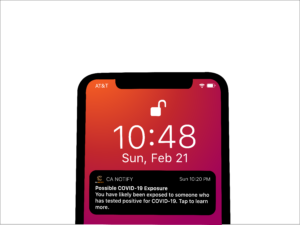 California’s automatic contact tracing app, CA Notify, informs a user that they have been in close proximity to a COVID-positive us

Class of 2019 alumna Hillary Zou’s dorm at UC San Diego was marked in red on the university’s COVID-19 Daily Dashboard map for wastewater SARS-CoV-2 detection for the fourth time in two weeks in February — a trend that has persisted since the start of the school year.

These wastewater evaluations are a part of the university’s COVID-19 protection measures, including improvements on ventilation and water systems, weekly testing and, most recently, the pilot of the CA Notify app. The app is one of many that have been developed to conduct instantaneous, automatic contact tracing.

In contrast to the traditional, manual contact tracing procedures used for epidemics like HIV/AIDS, which saw large outbreaks in the 1980s, and Ebola, starting in 2014, these new technologies can change the way nations approach pandemics in the future, especially for diseases like COVID-19 that can spread without symptoms.

The UC San Diego Health team took charge in scaling the deployment of CA Notify from 300,000 users in the UC pilot to over 7 million across the state within just 10 days, providing the project management, website design and support, customer service call center and analytics to bring the technology to the larger California population. The app has since become available to the public, with 26 million users as of Dec. 17.

“Our goal was to rapidly test, make improvements and expand the pilots as quickly as possible given how effective we knew the tool could be in preventing COVID outbreaks,” she said.

The app, designed in a partnership between Apple, Google, and the state of California, uses Bluetooth to allow users to exchange random, anonymized keys if they have been within 6 feet of another for more than 15 minutes, without gathering or storing any information about users or their movements. In particular, the app can detect proximity to both strangers and known contacts, unlike previous, more elementary contact tracing systems based on interviewing potential contacts.

May estimates that nearly 30,000 UC San Diego students, staff and faculty turned on exposure notifications, which is over half the school population.

“The tool becomes more and more effective as the number of people who adopt and use it grows,” May said. “Theoretically, it could blunt the cycle of outbreak by informing exposed users many days earlier than traditional contact tracing, thus allowing them to isolate and get tested sooner.”

However, since Zou started using the app on campus in September, she has not received exposure notifications, despite frequent emails about her dorm’s wastewater. She thinks some of the people in her vicinity have had the virus, but are either not getting tested or reporting their positive result on the app.

“I think the app is a great idea if everyone decided to pitch in, and the safety that the app goes through to swap keys via Bluetooth is a great way to protect privacy,” she said. “But I feel like the app doesn't provide much of an extra layer of protection, since only those with the app installed and those who care enough will actually input it in the app. Of the small circle of people I know on campus, not many of them actually have the app installed.”

On the other hand, Spanish teacher Stephany Marks, who contracted the virus last August, said that the app would have made her contact tracing process much smoother, despite these potential drawbacks.

“I never heard from either the state or CDC regarding contact tracing,” Marks said. “I had to do my own contact tracing and be sure to contact every person I was in close contact with up to two to three weeks prior. I think an app would have really helped me through that process.”

Automatic contact tracing isn’t the only function supported by recently developed apps. NOVID, another app developed by mathematician Po-Shen Loh to combat the pandemic, combines Bluetooth with ultrasound technology to correct a minor shortcoming of CA Notify, which marks users as exposed even if they are separated from others by walls and ceilings. NOVID now has over 110,000 users and has been deployed in four major universities and the city of Santa Fe, New Mexico.

The more major distinction is in its conceptual function. The app takes a network-based approach that tells users how many “degrees of separation” they are from the virus, creating a “radar system.” This system allows users to get notified before they are exposed, so they can take additional precautions ahead of time.

“If you install the app, it will decrease your probability of getting COVID,” Loh, also an associate professor at Carnegie Mellon, said in a December Math Club guest lecture about NOVID. “Every other app in the world decreases everyone else’s chance of getting COVID because you’ll quarantine for them when you get exposed.”

In his lecture, he also compared other contact tracing apps’ and NOVID’s “Nash equilibrium” — studied in game theory, it is the only state for which there is no benefit for any participant to switch strategies. Although he encourages everyone to download both kinds of apps, he pointed out that the Nash equilibrium of apps like CA Notify is that no one will install the app. Yet NOVID’s advantage is that everyone will install the app — individuals benefit personally from installing it, regardless of what others do.

A “Scientific Reports” paper conceded the poor Nash equilibrium of apps like CA Notify but said that smartphone-based contact tracing is still “worth pursuing on the part of governments.” It reported that epidemic control can be attained if at least 60 percent of the population uses the app.

Loh said that NOVID could help change the way societies approach disease control in the future if enough people download them: Rather than requiring that the whole country be shut down at once, individuals can stay home when they see that they are at risk.

“Once you have the powerful radar system, the way you avoid not just COVID but actually any awful pandemic is that if you see it coming, you take cover,” Loh said during the lecture. “This would effectively replace uniform shutdowns, where you suddenly say ‘Hey, we’ve got too many cases, nobody move,’ with automatic localized shutdowns, where it’s just that everyone’s like, ‘I don’t want to get sick.’”

Although Christopher Longhurst, chief information officer and associate chief medical officer at UC San Diego Health, said that such apps can help limit the spread of the virus, they cannot be substituted for “risk mitigation” policies that reduce the danger of transmission when people come in contact with each other.

“Until you are vaccinated, CA Notify, in combination with masking, handwashing and distancing, is your best bet for staying safe,” he said.