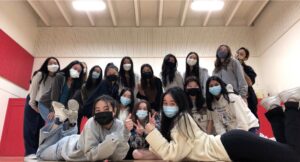 The dance team poses for its last group picture with the graduating senior in the studio on April 15.

Senior Isabelle Lee shrieked, raising her arms over her chest in an attempt to protect herself as the rubber burrito collided with her shoulder. The rest of the group giggled and continued playing the dodgeball-card game, Throw Throw Burrito.

On April 15, the 18 girls on the dance team met for its end-of-season celebration. Three groups of dancers rotated between the dance studio and tables in the quad, filming TikToks, munching on snacks and playing Throw Throw Burrito.

For Lee, the only graduating member of the team, the day was the highlight of a challenging year. While watching everyone laugh and have a good time together, she thought “it was really cool to see and feel how far we’ve come as a team since we first met each other on Zoom.”

The dance team has seen a very unconventional year with practice schedules often varying week to week and practices being held in the quad, on the upper field and on Zoom. Although they learned a total of six competition dances, the team was unable to compete this year due to concerns regarding COVID-19. Their only performance was at the March 25 home football game.

“Even though my senior year turned out to be nothing like how I pictured it would be in previous years, I’m still happy with how everything turned out,” Lee said. “I’m glad we stayed safe and took breaks when needed because this year has been extra tough for so many of us.”

Practicing with the team throughout the pandemic also gave her a sense of purpose she would have otherwise lacked.

The past four years on the dance team have had a positive impact on her high school career.

Lee, who will be attending UCLA, intends to continue dancing by joining a low to medium commitment club in college. Although she does not plan to follow a career in dance, Lee said she hopes to continue to stay active through it.

“Looking back, being on the dance team really helped me grow out of my shell and develop confidence, teamwork and time management skills,” Lee said. “I’m beyond glad I took the risk freshman year in trying out for the team because I ended up making some really good friends. It was super time consuming, but in the long run, I think dance has definitely been a huge positive impact on my life.”