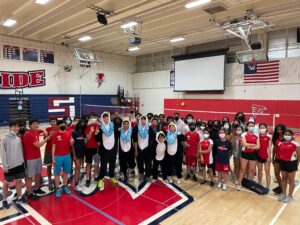 badminton
With an influx of new players and only one win during the season, the team looks forward to improving next season.

For the first time in school history, the badminton team ranked at CCS, placing second out of 28 teams.

This success at CCS belies the team’s struggles this year: they placed sixth out of seven teams in the upper De Anza league and ended with an overall record of 1-9.

“Our team as a whole underperformed, and we could have played a lot better,” Mar said. “But despite that, everyone could still pull through and achieve good results at CCS.”

Entering the season, the badminton team was strong and poised to win a majority of their matches. However, many players had minor injuries, and some even faced season-ending ones.

“We had a chance to win a lot of our matches, but as a few games went by, many injuries led to a lot of top players having to step down,” Mar said. “Compared to last year, our team has a lot more potential, but we weren’t able to fulfill all of that this year due to injuries.”

For example, senior co-captain Enoch Jung fractured his calf a third of the way into the season.

“As a captain, it was devastating and it obviously affected the results of some of our games,” Jung said. “In general, we lost a few games because we were missing key players, but we pulled through the season and ended with a firm win on senior night.”

The team received an influx of new players this year, with a few players from last year opting out for various reasons such as finishing their P.E. credits. As a result, a lot of focus was put on training these new team members.

Mar, who acts as an assistant coach, said that the steepest learning curve came for the beginners working on their fundamentals. As they grew more experienced, they became more consistent in their games and began working on better court coverage, making sure a player can return the bird no matter its position on the field. The team also practiced six days a week to improve players’ skills and gauge which position they would fit best into.

“The beginning [of the season] was rough and disorganized,” sophomore varsity player James Liu said. “We had a lot of new players and it was tough to find which position [suited each player]. We did a lot of training, and things became a lot better.”

Despite the improvement in the new players, Liu said that most of the team’s success came from its seniors.

“With the seniors leaving, it’s going to be rough, but as long as the freshmen and sophomores continue to train hard, I think we’ll become a lot better [next year],” Liu said.

Although strong seniors like Mar and Jung will be leaving, the team has others to carry on the torch, like Liu and sophomore Nishka Shah. Shah has been playing varsity badminton since her freshman year and loves the community built around the sport.

“This season was much better than last season and I got to meet a lot of new people. I especially enjoyed away games where I could hang out with friends and travel to other schools,” she said.