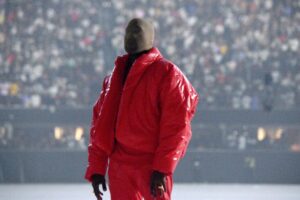 On Aug. 5, Twitter exploded with the news that rapper Kanye West was floating hundreds of feet at the latest listening party for his unreleased album, “Donda.” With techno music echoing through the Mercedes-Benz stadium, thousands of fans filled the seats as West, silhouetted by a smokescreen and stage lights, was hoisted high into the air by two pulley cables.

Despite the elaborate plays by West to promote his 10th studio album, Donda continued to be delayed before finally releasing on Aug. 29, with no prior warning.

The path to the album’s debut itself was rocky. From July to August, West held three separate listening events in Atlanta at the Mercedes-Benz Stadium, which he rented out for nearly a month. Each listening event was both remarkable and confounding, with reports of West floating and reconstructing his childhood home within the stadium itself. Once, West hosted an Apple Music livestream of him working on the album in a small prison-like room within the stadium. Viewers could watch him do everything from exercising to producing beats.

Despite these confounding delays, the album went public. “Donda” includes songs like “Jail,” “Off the Grid” and “Hurricane” that highlight the techno and intimate style that accurately portrays West’s emotions and makes the album unique.

The subject of West’s album is his mother, Donda C. West. She passed away in 2007 from complications due to cosmetic surgery, a tragic outcome that had a profound impact on West. She is referenced multiple times, with lyrics such as “If I talk to Christ, can I bring my mother back to life?”

The album has its share of highlights. It contains a marked style among the beats and vocals, best demonstrated by the electric and upbeat techno music in songs like “Believe What You Say” and “Jail.” Songs convey a wide variety of tones, messages and new artists like The Weeknd and Kid Cudi who blend their unique styles well with West’s, giving Donda a jack-of-all-trades attribute.

In addition, some songs in “Donda” are present for deeper, unrevealed reasons. The Donda Chant in the beginning, for example, features a recording of a woman repeating the word “Donda” for 52 seconds. Speculation around this chant includes the woman saying “Donda” 58 times at the pace of a heartbeat, alluding to the age West’s mother passed at. But while the message West delivered has an interesting significance, it is frankly extremely haunting and unwarranted in terms of tone, and West could have instilled a similar message in a less off-putting manner.

The album focuses on the theme of remorse and revolves around West being lost on the journey of life. Yet, such a raw theme represented by the aforementioned “Jail” and “Hurricane” seems to be muddled in the flood of mediocre songs throughout the album.

There is no need for the album to contain 27 tracks and stretch nearly 2 hours, especially when half the songs have little to do with advancing the album’s narrative. For example, “Tell the Vision” — despite being attributed to West — doesn’t contain a single vocal from him.

The last four songs on the album are all different versions of already existing songs. It’s as if West, indecisive on what to include, piled everything into the album and hoped that a few songs would stick. “Jail,” “Junya,” “Ok Ok” and “Jesus Lord” all have part two versions that have slight lyrical extensions of their namesakes from featured artists like Playboi Carti, Marilyn Manson and Lox.

West can do better, and he knows it. In fact, he took to Instagram on Aug. 29 stating that “Universal put my album out without my approval and they blocked Jail 2 from being on the album.” His claims, while unconfirmed, seem to be reflected in the final album product itself. Perhaps he was right to continue delaying the album, which feels like a rough draft of an essay: far over the word count and weighted down by unnecessary filler.

“Donda” remains a solid, acceptable album, but listeners can’t help but feel disappointed by what it could have been. With more time and preparation, West could have delivered a far more substantial, higher quality album that doesn’t feel like it was thrown together the night before (which, from many angles, it really was). Perhaps one day, Kanye will release a fully finished version of “Donda” for his fans to fully indulge in the powerful themes that it aimed to convey.