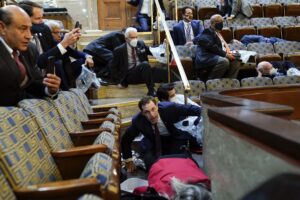 On Jan. 6, America watched in horror as thousands of pro-Trump domestic terrorists stormed the capitol, seeking to overthrow the results of the presidential election. Inside, pro-Trump lawmakers attempted to impede the transfer of power by disenfranchising millions of Americans and throwing out election results. American democracy was in grave danger.

The FBI swiftly arrested many members of the mob, and lawmakers on both sides of the aisle investigated the failed police response. But the real blame lies mostly in the hands of former president Donald Trump and lawmakers like Senator Josh Hawley (R-MO), who spread false conspiracies to their constituents and incited them to create violence.

In order to protect democracy, these elected officials must be removed, and the truth must become the currency of political parties if democracy hopes to survive.

Ever since the 2016 election, Trump and his most ardent supporters have lied about massive, systemic election fraud.

As multiple fact-checkers, state officials and investigators have pointed out, Trump’s claims are baseless and unequivocally false. It’s simple math: The votes never added up for him, no matter how many times they were counted or recounted in swing states like Georgia.

This convinced some of the 75 million Trump voters that the election was indeed rigged, and elected officials' support of these ideas lent credence to the fringe conspiracy, convincing millions to support it.

By supporting and spreading these lies, Trump and these Republican lawmakers failed their constitutional duty as elected officials. They also created a monster: a mob that nearly killed some of the lawmakers and could have done even more damage to the seat of our democracy.

This behavior must be punished, and the truth about the results of the election and processes of American democracy must be restored. If the U.S. sets precedent for dangerous political behavior like lying and deception, the laws that govern it will be rendered useless, and the Constitution will ultimately fail.

The House has already impeached Trump for “incitement of an insurrection” and the Senate will hold a trial. While this trial will only impede President Joe Biden’s early days in office and remind America of the horrific events that occurred for the months to come, the trial is already in motion and the Senate must vote to convict.

Should Trump be acquitted, Congress must censure him for his actions with a simple majority vote.

All other lawmakers must work together to combat conspiracies by spreading  facts of the election. These lawmakers, along with Biden, must restore truth and dignity to the White House and Congress. Without members in Congress and the White House to give weight to their lies, pro-Trump conspiracists will lose media attention and become irrelevant.

My suggestions may seem extreme; eight senators and 139 representatives would be removed from office, either replaced by a gubernatorial appointee or in a special election, and Trump would be denied a chance at a 2024 presidential bid.

But these actions are necessary. Elected officials serve their constituents, but they also must uphold their duty to follow the law. The capitol riots were a dark day for democracy around the world. But there’s a way to prevent it from ever happening again, and it starts with a commitment to telling the truth.