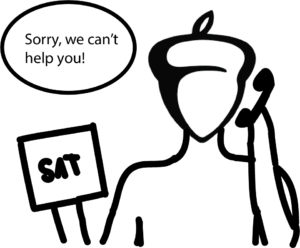 On Oct. 2, several SHS students, ranging from juniors taking their first SAT exam to seniors looking to improve their scores, filed through the hallways at Monta Vista High to find their respective testing rooms.

Two weeks later, senior Henrik Zhang, along with other students who took the Oct. 2 SAT at Monta Vista, received an email from CollegeBoard with bad news — his score had been “delayed while [CollegeBoard] conduct[s] a review,” and he would be notified of an update within three weeks.

Zhang had hoped to use the score for early decision and early action college applications, most of which were due on Nov. 1 or earlier. Because of the delay, Zhang was unable to submit an improved score for a mid-October deadline and was forced to go test-optional.

Senior Savannah Lin, who received the same email, expressed her frustration at CollegeBoard’s lack of explanation and unresponsiveness.

“It’s extremely aggravating how little [CollegeBoard] seems to care about students’ concerns, especially since these scores are so important to seniors,” Lin said.

Lin has repeatedly phoned CollegeBoard, receiving just one response on Oct. 25 revealing that they had not even received Scantrons from the Monta Vista administration. Monta Vista’s administration gave no further insight, saying they were “only the site” and didn’t have other information, Lin said.

As a result, many seniors prepared to submit ACT scores or go test-optional, as the score release date for the Oct. 28 SAT administration at the school was projected to pass the vast majority of early deadlines.

Other students signed up last-minute for the Oct. 28 SAT, hoping to update colleges with their scores after submitting their applications. Many of these students, such as senior Yousuf Zaman, put aside their other priorities, such as college essays, to study as much as possible in the days leading up to the SAT, he said.

Ultimately, CollegeBoard released the scores for the original Oct. 2 SAT on Oct. 28, just hours after many seniors took the SAT at school. While many were relieved, the lack of explanation surrounding the incident infuriated students, Lin said.  Seniors like Zhang were especially frustrated that the original scores came out after they spent extensive time preparing for and taking the makeup Oct. 28 SAT.

Zaman, who took the Oct. 2 SAT in hopes of increasing his score from May, said that this incident especially highlights CollegeBoard’s incompetence because of the severe challenges students have had in finding testing centers throughout this school year with sudden and unexplained cancellations.

“These incidents aren’t isolated,” he said. “CollegeBoard really needs to acknowledge the weight they have over students’ success all over the country.”