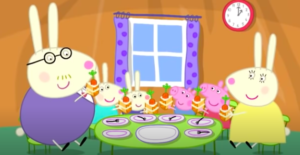 I don’t want Peppa Pig as my alarm clock.

I often fall asleep on my textbook while doing homework late at night. So, it wasn’t out of the ordinary when my YouTube math lecture slowly transformed into gibberish. What was out of the ordinary, however, was waking up at 6 a.m. to Peppa Pig screaming about carrot cake.

Startled, I sat up and checked my computer screen, only to find that I was an hour into a Peppa Pig episode — and it only got worse from there.

I swiped through my watch history and saw episodes of Morphie TV teaching me the ABCs, Mickey Mouse Clubhouse and Nursery Rhymes.

I thought this nightmare would be over by the time I clicked out of the videos and reloaded my YouTube screen; instead, I found my recommendations full of children’s television shows (I would be lying if I said I didn’t enjoy these, though).

Aside from my personal experience, however, the YouTube algorithm could be disturbing to children who stumble across inappropriate videos through autoplay.

The New York Times reported that a 3-year-old boy was guided to a video titled “PAW Patrol Babies Pretend to Die Suicide by Annabelle Hypnotized" in his recommendations while on YouTube Kids.

The YouTube Kids app is supposed to cater to children with only family-friendly videos; however, the autoplay algorithm can sometimes inadvertently show inappropriate videos. These non-age-appropriate videos could traumatize children and negatively affect their brain development.

According to a kidsinthehouse video, when children watch non-age-appropriate content, they can develop anxiety because they are not developmentally or emotionally ready to deal with such graphic content.

The YouTube algorithm for recommending videos is based on the frequency of clicks and the amount of ad revenue gained from each video, not what is the most beneficial to the viewers. Auto-Play shouldn’t have the power to dictate which video is played next because the content could be not suited for the viewer.

Auto-Play should not exist, not only to avoid being awoken by weird YouTube recommendations but also to protect the innocence of children.